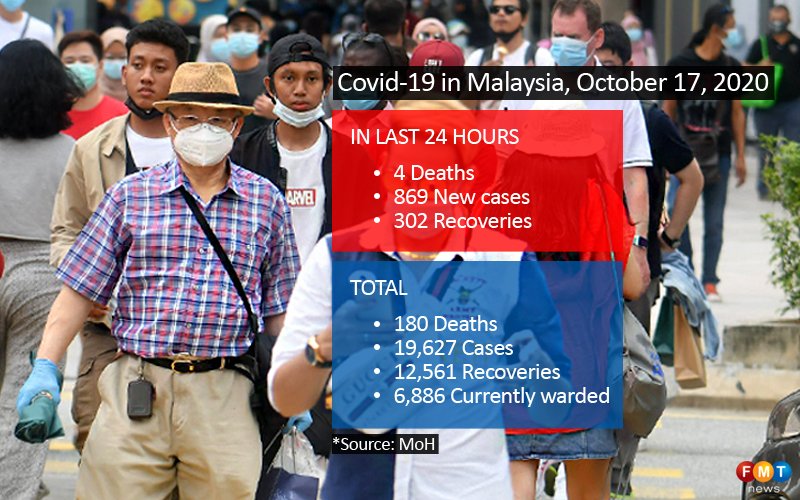 PETALING JAYA: The health ministry has reported a record high of 869 Covid-19 cases in the past 24 hours, all of which are local infections.

This is the highest number of infections in a day since the pandemic first struck Malaysia. The previous record high was 691 cases reported on Oct 6.

Health director-general Dr Noor Hisham Abdullah said the 869 new cases bring the total number of infections in the country to 19,627.

However, he said 90% of the new cases were from localities under lockdown, conditional movement control order (CMCO) and from prisons.

In a press conference, Noor Hisham said there were 302 recoveries, bringing the total number of those discharged to 12,561, or 64% of total cases.

The health ministry also reported four deaths, which brings the toll to 180.

A total of 6,886 people are still being treated. 91 of them are in the intensive care unit, with 30 requiring respiratory assistance.

The four dead were three Malaysians, two men and one woman, aged 71 to 88, and also a 53-year-old male foreigner.

All of them died in Sabah, while two of them had histories of chronic illnesses.

Sabah continued to record the most number of cases with 451, while the Klang Valley made up 20.3% of cases, with Selangor, Kuala Lumpur and Putrajaya recording 159, 15 and two cases respectively.

Noor Hisham added that 224 of the cases today were from the Tembok, Remand Prison and Seberang Perai Prison clusters, which have been isolated from the community.

Sarawak, Perak, Terengganu, Johor, Negeri Sembilan and Melaka reported fewer than five cases each, most of which were detected in active clusters or through close contact screenings. 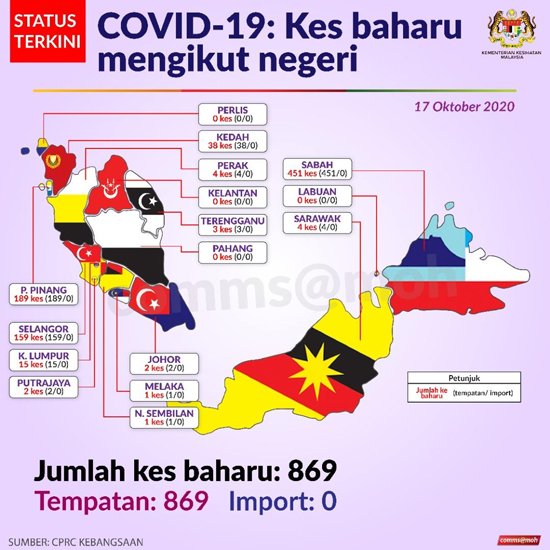