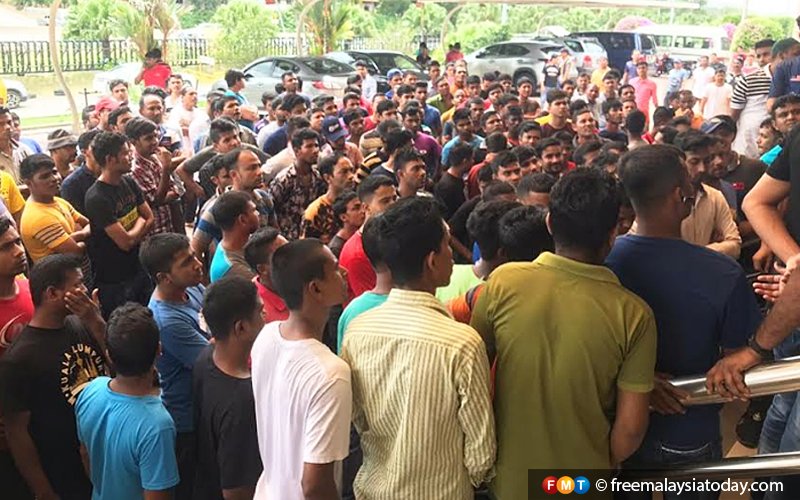 It’s been a profitable pandemic for Top Glove Corp, the world’s largest maker of disposable rubber gloves. But as the company helps to meet the world’s needs for public health equipment, its own workers are suffering.

This week, the Malaysian government announced that at least 3,400 Top Glove employees had tested positive for Covid-19. Over the past two weeks, the company has contributed well over half of Malaysia’s new cases on some days, leading to a temporary shutdown of its factories.

It amounts to a crisis for Malaysia, which makes more than half of the world’s rubber gloves. But it isn’t a surprising one. The working conditions that appear to have enabled the Top Glove outbreak are commonplace throughout Southeast Asia. As the region becomes home to more of the world’s manufacturing, its mistreatment of labourers will likely become too glaring to ignore.

In the 1990s, Southeast Asia became a destination for migrant labourers from around the world. The lure was higher wages in fast-growing industries that were (or claimed to be) struggling to recruit workers locally. The United Nations estimates that there were about 10 million migrants in the region by 2017, many undocumented. Malaysia is home to at least one-third of them, and they make up at least a quarter of its labour force.

Despite their critical importance to the region’s economies, these labourers are generally denied the same rights and social services as citizens. In Malaysia, the government mandates health insurance coverage for documented workers, but fees and other barriers ensure that many still can’t access medical care (creating the risk, now realised, of easy disease spread). Likewise, high costs, language barriers and a fear of retaliation often inhibit migrants from seeking legal help.

Such impediments make the region’s labourers especially vulnerable to exploitation. It’s common for migrant workers to pay thousands of dollars in fees to agencies that secure employment for them abroad. Once they reach their new work sites, they’re deeply in debt and unable to return home for years (in a practice often known as debt bondage). This allows unethical employers to easily take advantage of them.

Malaysia’s rubber glove industry has been accused of being a hub for such practices. In 2018, the Guardian reported that Top Glove and WRP Asia Pacific Sdn Bhd, another major glove maker, demanded excessive overtime from workers, punitively withheld their pay, confiscated their passports, and imposed recruitment fees that took years to pay off. Another report found similar abuses, as well as evidence of overcrowded worker housing. (Both companies have denied violating workers’ rights.)

Covid-19, and the flood of rubber glove orders that resulted, has only made matters worse. In April, Top Glove employees provided photographs and video of overcrowded work and living conditions at the company’s facilities to local media. In July, US Customs and Border Protection (CBP) announced that it was blocking the import of Top Glove products due to labour violations, including debt bondage. Not long afterward, the company agreed to reimburse US$40 million to more than 10,000 workers for recruitment fees.

It was a major step forward but an insufficient one. A complex of Top Glove factories in Selangor are now at the heart of Malaysia’s resurgent Covid crisis. The company blames increased testing for the high numbers. But crowded worker dormitories were almost certainly the culprit, just as they were in earlier outbreaks in neighbouring Singapore. Malaysia’s human resources minister didn’t hesitate to point fingers: “I have visited the hostels and the conditions are terrible,” he told local media.

It’s hard to believe that the government only recently learned of these problems. More likely, the cozy relationship that exists between regulators and large employers in much of Southeast Asia prevented them from being addressed. Changing that dynamic won’t be easy: Malaysia and its regional counterparts have spent two decades embracing international agreements to protect the rights of migrant labourers, yet continued scandals – from Malaysia’s factories to Thailand’s fishing industry – suggest that they aren’t fully committed.

More international pressure could help. The CBP’s recent actions against Top Glove should serve as a potent reminder of what can be lost if proper action isn’t taken.

Meanwhile, as European and American companies shift their production out of China, they’ll have an opportunity to upgrade their own operations, and those of their contractors. They should start by requiring more frequent and credible audits of the labour practices at companies they do business with.

That won’t guarantee that workers aren’t abused. But as Top Glove’s outbreak has shown, Southeast Asia’s corporations are quick to protect the vulnerable when others are looking.

The views expressed are those of the writer and do not necessarily reflect those of FMT.