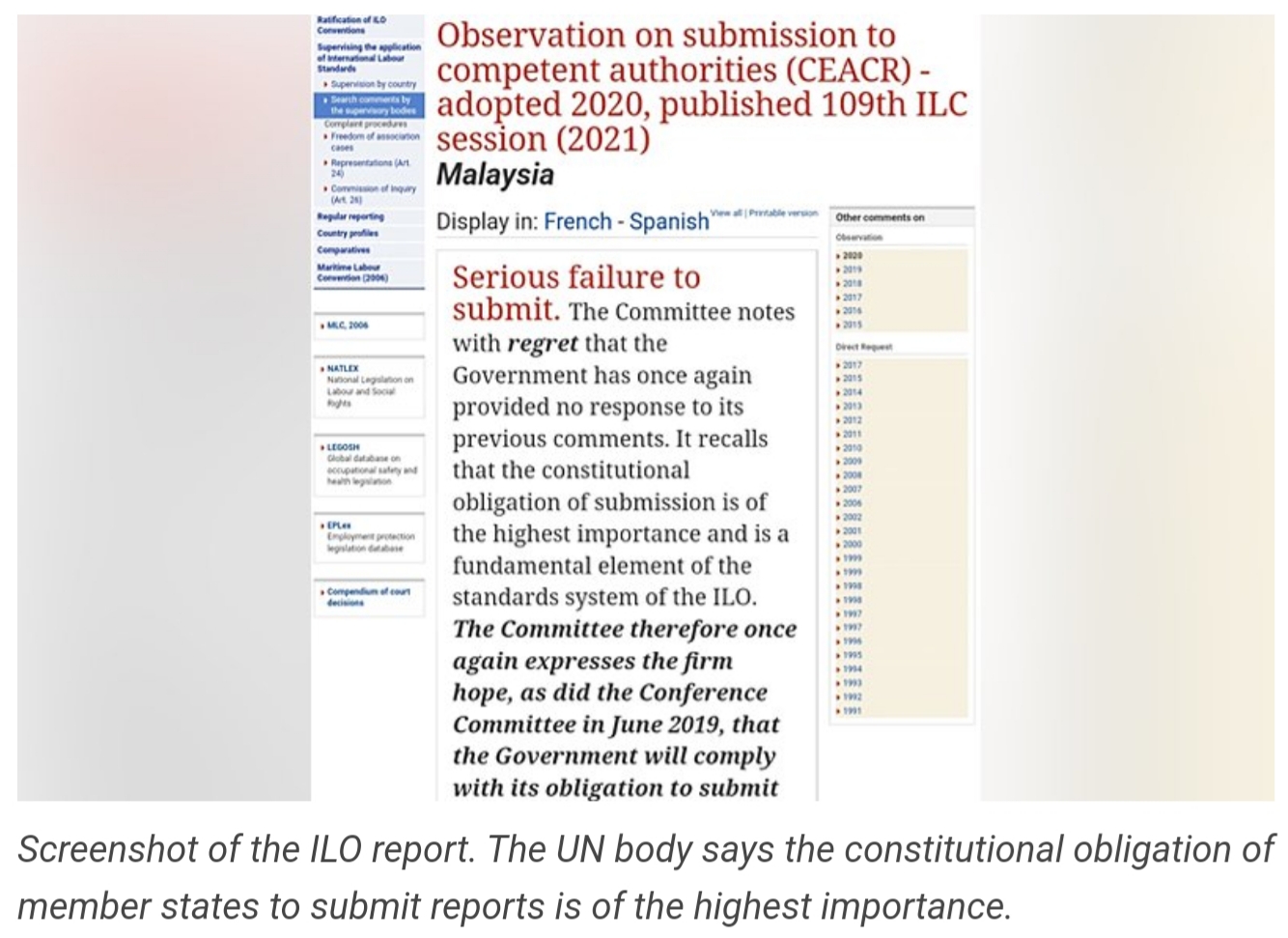 PETALING JAYA: The International Labour Organization (ILO) has placed Malaysia among dozens of countries in the “serious failure to submit” category which comprises governments that have repeatedly ignored requests for reports on specific issues.

In the Application of International Labour Standards 2021 report of the ILO’s committee of experts on conventions and recommendations, it said Malaysia had failed repeatedly over the last few years to submit the requested reports.

“The committee notes with regret that the government has not replied to its previous comments. The constitutional obligation of submission is of the highest importance and is a fundamental element of the standards system of the ILO.

“The committee hopes, as did the conference committee in June 2019, that Malaysia will comply with its obligation to submit conventions, recommendations and protocols to the competent authority,” said the report.

The ILO once again requested the government to provide information on the submission of ILO Recommendation C198, adopted by the body’s annual conference attended by the human resource ministry representatives, including the minister, every year to Parliament.

“In addition, the committee requests the government to provide information on the submission of the Violence and Harassment Convention (C190) which was adopted by the ILO at its 108th Session in 2019,” the report said.

The C198 recommendation refers to the various aspects of employment relationship, mainly laws that protect the vulnerable sectors, including migrant workers.

Among others, the ILO emphasised that the national labour policies must be formulated and implemented in accordance with national laws and practice in consultation with the organisations representing the employers and workers.

It said the laws should at least include measures to combat “disguised” employment relationships that use contracts hiding the true legal status of workers that could result in exploitation.

“They should provide effective access to employers and workers for speedy, inexpensive, fair and efficient procedures and mechanisms for settling disputes,” it said.

The recommendation specified effective protection to workers especially affected by the uncertainty, including the most vulnerable such as those in the informal economy, migrant workers and disabled employees.

“ILO member states should also have clear policies on gender equality and better enforcement of the relevant laws and agreements so that the gender dimension can be effectively addressed.”

In the context of migrant labour, it said governments should prevent abuses of this category as they were normally affected by an uncertain and vague employment relationship.

As for Convention 190, member states have been told to take appropriate steps to prevent violence and harassment in the workplace, including those which are gender-based.

Among others, they should provide workers information and training on the identified hazards and risks of violence and harassment and the prevention and protection measures.

“Victims of gender-based violence and harassment must have effective access to safe and effective complaint and dispute resolution mechanisms and support,” it added.

FMT has reached out to human resources minister M Saravanan for his comment.