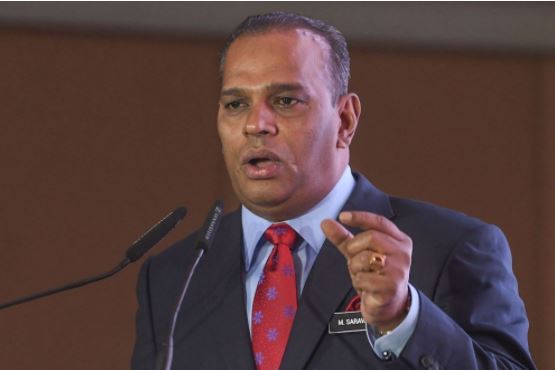 THE National Union of Bank Employees (NUBE) has taken the Human Resources Ministry to task over its failure to respond to the International Labour Organisation (ILO) on its recommendations.

NUBE general secretary J. Solomon said it was shocking that Human Resources Minister M. Saravanan had blamed the suspension of parliament for the delay in the tabling of ILO’s proposals.

“He must be either ill advised by his officers or he is undermining the parliamentarians and the intelligence of the public.

“Parliament was suspended on January 12, 2020, not from 2006. From June 2019 till the beginning of January 2021 the government could have honoured its promise,” he said in a statement today.

The committee of experts on the Application of Conventions and Recommendations has reminded Malaysia that the constitutional obligation of submission is of the highest importance and a fundamental element of the standard system of the ILO.

Solomon said that at the ILO conference in 2019, Putrajaya had promised to fulfil its obligation to submit information pertaining to the conventions, recommendations and protocols adopted at the ILC to the authority.

“These ILO instruments have been adopted since 2006 till 2018 and the government’s response has been pending since then.”

Yesterday, Saravanan said the ILO recommendations had not been tabled because parliament is suspended during an emergency.

His explanation comes after Malaysia landed in the “serious failure to submit” category in the Application of International Labour Standards 2021 report.

The ILO said Malaysia had failed repeatedly to submit the reports.

Soloman said the least the government could have done was to write to the ILO and say it was busy containing the Covid-19 outbreak and would send the report soon.

“Naturally, the minister must be aware that he does not need parliament to convene to write a letter of that nature.

“And this year they could have written to the ILO to say that the parliament is suspended in January 2021 and we are unable to honour our promise made before and we will report to the parliament once the suspension is uplifted.”

He said that unfortunately, the previous government and the current government has not taken the workers seriously especially the private sector workers and that is why the income inequality is so wide and workers are continuously abused by irresponsible employers.

“The current minister (Saravanan) is fond of not responding to letters sent by Unions in respect to workers and that could be the reason why he has not responded to ILO comments.”

Solomon added that in accordance with the tripartite nature of the ILO, compliance with this constitutional obligation is intended to enable representative organisations of employers and workers to participate fully in the supervision of the application of international labour standards.

“If a government fails to comply with this obligation, it also makes it hard for MEF and MTUC to comment and an essential element of tripartism is lost.

“A government who fails to comply is a government who deliberately refuses to respect the tripartite nature or the government is too involved in running business and they themselves are in breach of international labour standards.”

He urged Saravanan to address the health and safety of workers instead of merely focusing on how to increase Socso funds. – March 26, 2021.