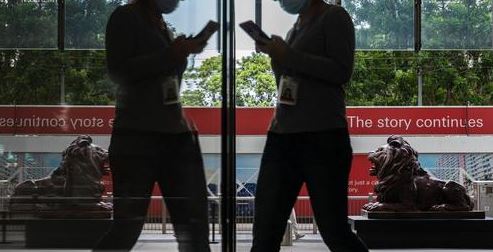 HSBC Holdings Plc apologized to customers in Hong Kong after an update to its online and mobile banking terms stoked fears over overseas access to its services in the financial hub.

The quick mea culpa by Hong Kong’s biggest bank -- triggered by a Twitter post -- underscores growing concerns in the city over not only civil society but also pressures on businesses as China tightens its grip.

Banks are trying to navigate an increasingly fraught political environment. The government last week used them as a hammer to shutter the city’s premier pro-democracy newspaper, Apple Daily, ordering seven lenders against dealing with the company. The banks haven’t been identified. Access to funds in the city is becoming a sensitive topic with thousands of Hong Kongers leaving for the U.K. and other places as freedoms are restricted.

Against that backdrop, the city’s residents were spooked after a Twitter post on Tuesday shared a link to updated online and mobile banking terms on HSBC’s website. The bank announced changes to its terms from July 26. It said customers may not be able to use online or mobile banking outside of Hong Kong.

The incident was widely reported by major local newspapers, including Ming Pao, Sing Tao Daily and Hong Kong Economic Times. On LIHKG, one of Hong Kong’s largest online forums, a post on HSBC has more than 800 comments since late Tuesday, with some people saying they would transfer funds to other banks.

HSBC was quick to reassure customers that there were no changes and that it only had combined terms for its internet banking, mobile app and mobile security key into one document. “HSBC Hong Kong customers can continue to access banking services through Online Banking and Mobile Banking outside of Hong Kong SAR,” a spokeswoman said. “There is no plan for any amendment of the services. There are similar cross border disclosures in other markets.”

The bank also placed a “Special Announcement” pop-up on its mobile app, saying there was no plan to change services.

It’s not the first time HSBC has found itself in a hot spot. Late last year, it was forced to freeze the account of an exiled former lawmaker, Ted Hui, after which Chief Executive Officer Noel Quinn was called in to questioning by U.K. lawmakers. Quinn, who also reached out to Hui personally to explain, said the bank had no other options than to comply with local regulations.

The lender has also been criticized for publicly endorsing the Beijing-imposed security law and had its branches and main office vandalized during the protests that rocked the city in 2019. Standard Chartered Plc, another big bank operating in the city, also backed the legislation.

“HSBC hasn’t clearly explained why those terms are there, but I believe if Hong Kong customers immigrate overseas, they usually have set up offshore accounts already,” said Ka-chung Law, an economist and adjunct professor at department of economics and finance at City University of Hong Kong. “But if someone has to leave Hong Kong urgently and doesn’t have an offshore account yet, that’ll cause uncertainties and worries.”

Analysts at Bank of America Corp. have estimated that emigration-related outflow of money to just the U.K. could reach HK$280 billion ($36 billion) this year, and HK$588 billion over the next five years.