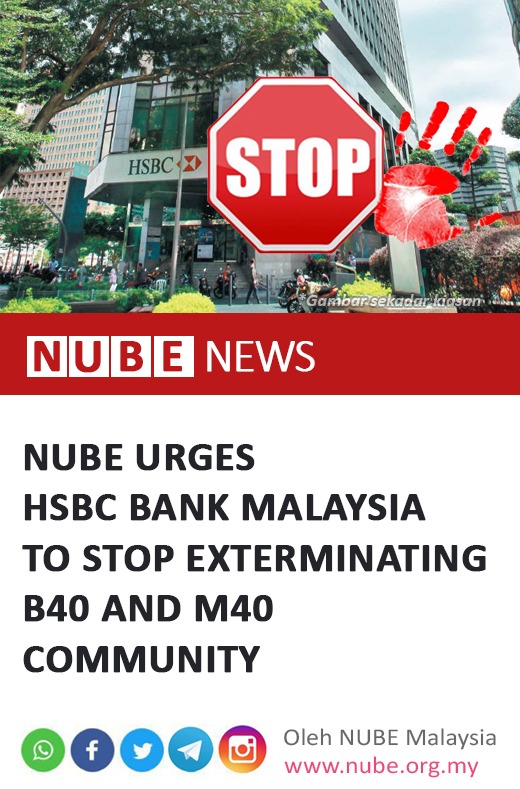 1. The National Union of Bank Employees (NUBE) refers to HSBC Bank Malaysia Bhd’s media statement which denied that up to 600 of its workers will be sacked in its downsizing exercise, to be conducted this year.

2. NUBE would like to emphasize that the Bank’s statement is a blatant lie considering that it has announced that it will shut down a total of 13 branches across the country. The bank’s managers have been engaged in numerous underhand tactics to intimidate, manipulate, and coerce bank workers to accept the so-called Voluntary Separation Scheme (VSS) or Mutual Separation Scheme (MSS) in reality is retrenchment.

3. HSBC Bank has engaged in merciless actions of forcing its workers to be retrenched through VSS/MSS, even though the bank repeatedly claims the scheme is voluntary. The permanent jobs of the Malaysian workers are being outsourced including to workers in other countries. It is merciless because it is targeted at the B40 and M40 community in HSBC Bank.

4. The HSBC Bank’s heartlessness is clear when it took advantage of the uncertainty created by the Covid-19 pandemic, with the 1st Movement Control Order (MCO) in March 2020, to harass, intimidate and carry out forced retirement or retrenchment of members without any negotiation with the Union and also in violation of the contractual Agreement signed in 2019 where the court has given cognizance.

5. HSBC Bank has now taken full advantage of the current total lockdown to push even more vigorously, its agenda of causing the layoff of about 600 B40 and M40 workers through the retrenchment. This will not only add to the despair of the workers affected, but also the livelihood of their families or dependents.

6. HSBC Bank, a multinational corporation, has failed to promote respect for human rights in its operations, given its significant focus on profits and shareholders’ wealth. The bank is retrenching workers even as it is making profits, having failed to consider suitable alternative arrangements, as is required under the Code of Conduct for Industrial Harmony which states that the employer should provide greatest possible stability in terms of job tenure.

7. It must be stressed that the Code clearly states that the employer (HSBC Bank Malaysia) should in consultation with the employees’ trade union (NUBE), take positive steps to avert or minimise reductions of workforce by the adoption of appropriate measures, as spelled out in the Code.

8. Regrettably, HSBC Bank has not sought to engaged in genuine negotiation with NUBE, leading to ongoing trade disputes. HSBC Bank Malaysia is continuously violating the laws of the country by discriminating and exterminating the B40 and M40 community in HSBC.

9. NUBE had sent numerous letters of complaints addressed to Minister in the Economic Planning Unit in the Prime Minister’s Department, Ministry of Finance, Ministry of Human Resources and Bank Negara Malaysia to pre-empt the retrenchment since November 2020. However, all complaints of NUBE in respect of HSBC Bank are not being addressed to protect the interests of bank workers.

10. The Yang di-Pertuan Agong Al-Sultan Abdullah Ri’ayatuddin Al-Mustafa Billah Shah in his Royal Address in Dewan Rakyat on 19 May 2020 quoted, “I would like to urge employers not to retrench their workers indiscriminately”. “All parties must do their part and sacrifice to save the nation’s economy”.

11. The protection of workers was increasingly undermined not just by HSBC Bank, but also by the support of Bank Negara Malaysia towards HSBC Bank, as well as the inaction from Ministry of Human Resources, the Ministry of Finance and the Minister in the Economic Planning Unit of the Prime Minister’s department, which tantamount to an act of treason. We urge the authorities to take the necessary cause of action against these parties who betrayed the trust of the King.

12. HSBC Bank's denial is merely intended to deceive and confuse the rakyat and members of NUBE. NUBE stresses that HSBC Bank’s implementation of VSS/MSS should be disallowed by the authorities when there has been no negotiation with NUBE on this matter, and certainly not when the people are faced with the brutal impact of the COVID-19 pandemic.

13. The government declared a Lockdown effective 1st June 2021 to curb the spread of the Covid-19 as we were having two digits mortality rates. During the whole month of June, the mortality rates shot up by more than 5 times reaching three digits. The crisis was compounded by increase in daily new cases rising to more than 9,000 cases. Although the number of cases has reduced, the situation continues to be dire.

14. While the population is subjected to such a traumatic situation, HSBC Bank continues to make increased profits despite the pandemic. Moreover, the Bank is investing RM1.3 billion to build a bank fit for the future while the poor workers in the B40 and M40 community at HSBC Bank are being robbed of their livelihood.

15. This is the cruellest human approach towards fellow human beings by a foreign bank which has conspired with the people in power and influence, against poor Malaysian workers. Malaysian authorities must act immediately against such traitors in power whose action tantamount to treason.