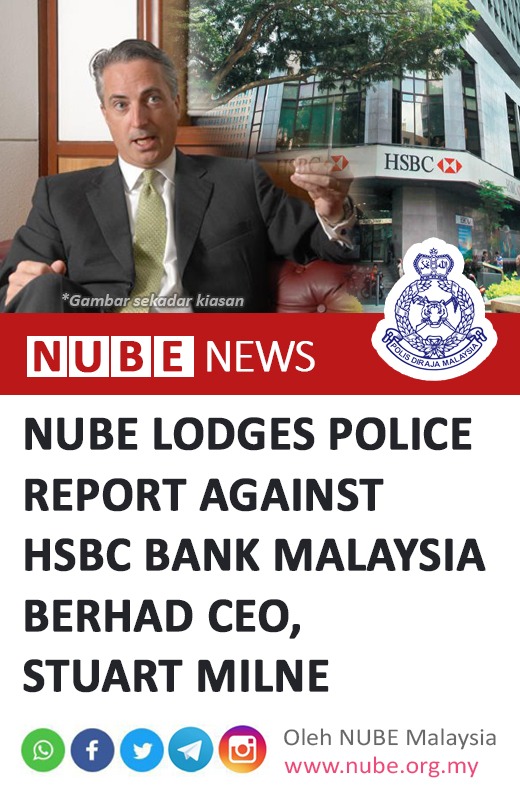 1.    The National Union of Bank Employees (NUBE) lodged a nationwide police report against HSBC Bank Malaysia Berhad CEO, Stuart Milne for laying off workers under the guise of Voluntary and Mutual Separation Scheme (VSS/MSS).
2.    On 3rd June 2021, HSBC Bank announced a retrenchment scheme under the guise of VSS/MSS as a result of arbitrary outsourcing/insourcing of the non-executive functions, closure of profit-making branches and most importantly this is done without any negotiations with NUBE.

3.    The obligatory objective for an employer to negotiate with the Union is to avoid irresponsible employers from cheating the workers. Apparently, HSBC Bank rushed to deal directly with the workers, without prior negotiation with the Union, because its sole intended purpose is to shortchange and deceive the workers to the core. Some of the workers have worked more than 30 years in HSBC and were shocked of the announcement especially when the bank is making continuous profit.

4.    Last year on 18 May 2020, His Excellency Yang di-Pertuan Agong Al-Sultan Abdullah Ri’ayatuddin Al-Mustafa Billah Shah, in His Royal address urged employers not to retrench their workers indiscriminately. Although there were no deaths reported, His Excellency was deeply concerned about the impact on his subjects arising from the then 44 new cases of Covid-19.

5.    When HSBC CEO announced the retrenchment on 3rd June, the new cases of Covid-19 had skyrocketed to 8,209, and 103 deaths reported. Malaysian workers faced severe hardship during the worst month with the lockdown. Clearly, HSBC CEO when announcing the retrenchment showed no care or concern for its workers during these deeply challenging times and is an act of disobedience to our King.

6.    At the same time HSBC rather proudly, announced that it is spending RM1.3 billion for digitalization. It appears that, Collective Agreements, the IR Act 1967, the EA 1955, etc, and the Rukun Negara (Pillars of State) being the laws and national philosophy written by the light of coal power, don’t work against digitized mercenaries like HSBC Bank which believes that CASH is KING.

7.    Further, HSBC has shown no regard to the right of livelihood of the workers guaranteed under the Constitution of Malaysia and has proceeded to act in contravention of the Federal Constitution.

8.    Despite the command of the King for the employers not to retrench their workers indiscriminately, HSBC is acting in defiance of the King's command.
9.    The disobedience of the CEO of HSBC Stuart Milne is an act of treason to our King and is beyond acceptable by all Malaysians and has caused mental harm to the workers. Therefore, NUBE members have lodged reports for the police to take the necessary course of action.