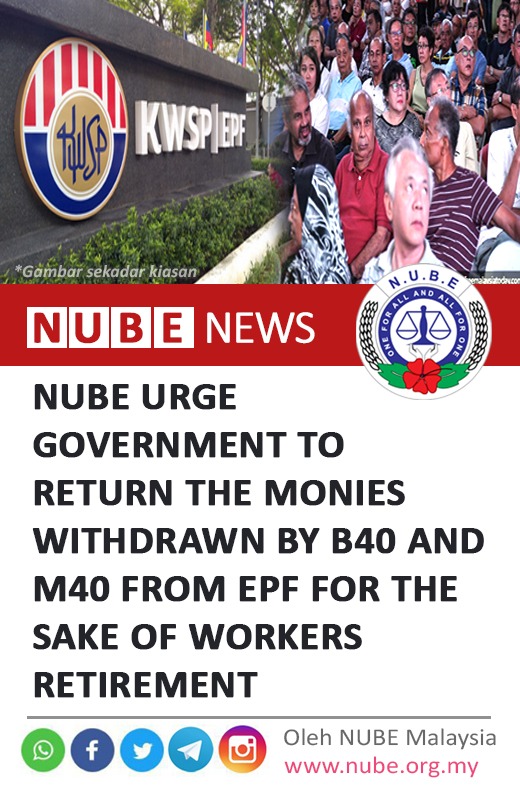 The main aim of the establishment of Employees Provident Fund (EPF) is a savings scheme for employees’ retirement and the management of the savings for the retirement purposes and for matters incidental thereto governed by the EPF ACT 1991 (Act 452).

However, since the Covid-19 pandemic, the EPF’s original goals have begun to shift, and this includes the erosion of savings in this statutory body.

EPF’s investment assets grew to RM1.02 trillion at the end of 2020 but declined to RM989.14 billion in June 2021. Under the government stimulus package, instead of providing rebates and incentives during the pandemic to workers the government made the workers withdraw from their savings to boost the economy. This is done through the introduction of i-Lestari, i-Sinar and i-Citra and members of the EPF had withdrawn RM101 billion from their savings.

The ultimate beneficiaries of the 3 schemes are the government and the employers. The Government prided that its stimulus package included RM101 billion when it is not from the government’s coffer but from the workers retirement savings. However, the majority of 7.4 million who withdrew are B40 and M40 members of the EPF. While these withdrawals are ploughed back to the economy and the business community benefitted in a short term, the poor members’ retirement savings have depleted.

Some 6.1 million EPF contributors are now left with savings of less than RM10,000. Of this figure, some 3.6 million members have less than RM1,000 in their savings, leaving them vulnerable and unprotected for their retirement. Based on the minimum target of RM240,000 savings that EPF members should have upon reaching the age of 55, only 3% can afford retirement, and sustain it with their savings.

EPF Board’s primary goal should be to protect employees’ retirement savings and not to please the Government for their political mileage and irresponsible employers.

Hence, the National Union of Bank Employees (NUBE) urge the Board to demand that the government return the monies withdrawn by the B40 and M40 EPF members to support the Government’s stimulus package. The Board must also be reminded it does not use workers’ funds to finance employers who exploit workers. Failure to protect workers interest would mean “A Great Betrayal” of the trust given to the EPF Board members.

The government's move to extend the period for the reduction in the EPF contribution rate from 11% to 9% in the recently announced Budget 2022 will further heighten the low retirement savings problem faced by workers.

Since it is the Government which caused a huge decline in the B40 and M40 workers’ retirement savings, through its stimulus package, it is only proper that the government replenishes monies withdrawn by these workers. The Government need to find a mechanism for the replenishment for the protection of the contributors when they retire.

At the same time, NUBE reiterates that the EPF Board must ensure that EPF members’ monies are not used to invest directly or indirectly in businesses that exploit workers, promote union busting or for political mileage. Every decision made by EPF Board must take into account its responsibility to sustain members’ funds for the contributor’s wellbeing for their old age as Malaysia will become an ageing nation by 2030.
The EPF Board needs to instil confidence to the members and not be used as a bailout for businesses or political parties’ enhancement under the expense of workers.