Multi-unionism to bring doom and gloom to workforce - workers' groups 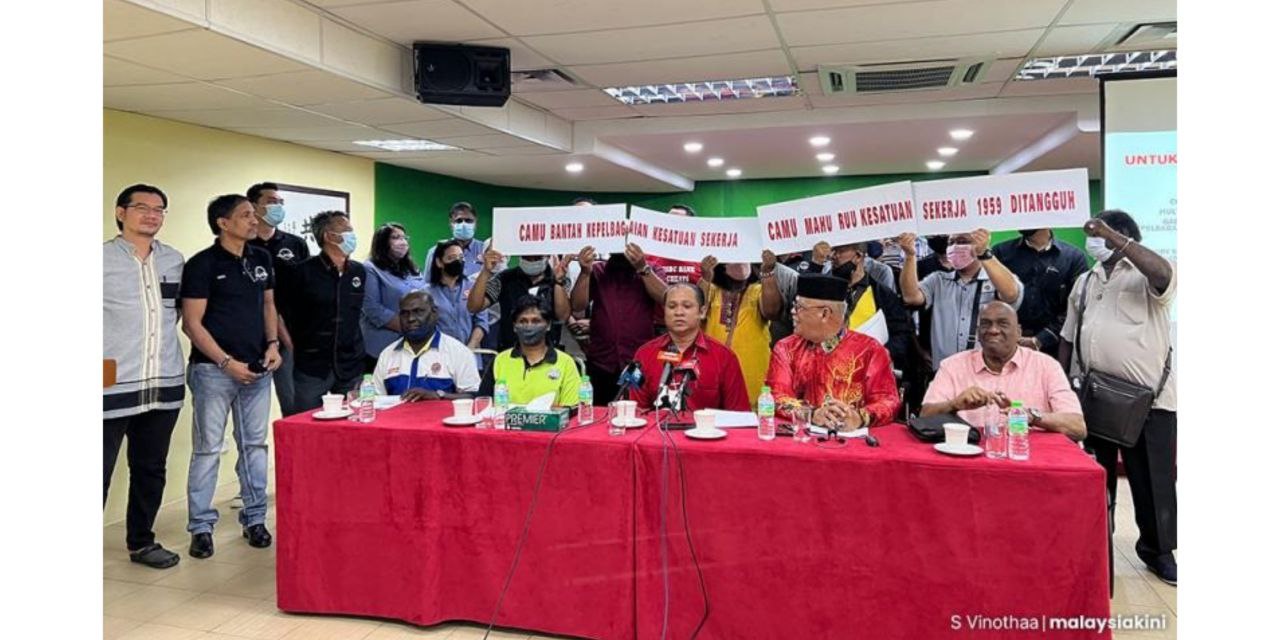 The multiplicity of unions being introduced in the Trade Unions (Amendment) Bill 2022 threatens to shrink unionisation in the country by half to 3 percent, says a coalition of 40 trade unions representing 500,000 workers in Malaysia.

The Coalition Against Multiplicity of Unions (Camu) has called for the postponement of the second reading of the Bill scheduled in the July-August Parliament sitting and to instead hold consultative talks with trade unions.

Camu said in a press conference today that the trade unions were never consulted on the amendments and the coalition was objecting to half of the proposed changes with specific reference to multi-unionism.

Having submitted a memorandum containing their objections to Prime Minister Ismail Sabri Yaakob on July 2 and not heard back from his office, the coalition planned to go on a nationwide roadshow to brief other unions and garner support.

Camu chairperson and Club Employees’ Union general secretary Rudy Rusli said the coalition had conducted a study in countries like Indonesia, Sri Lanka, and India where in some cases union membership had risen but in all cases, the collective agreements that represented workers’ rights dropped drastically.

“The study is based on the experiences of the trade unions that have a multiplicity of unions in their workplace and countries that have already implemented this practice,” he said.

He said multi-unionism would trigger instability, disharmony and division in the workplace as it promoted unhealthy competition.

“Worst of all, the multiplicity of unions in one workplace will erode the socioeconomic and rights of workers because it will become more difficult to sign a collective agreement.

“Wages and benefits can be repressed and income inequality can widen.

“Workers can potentially be represented by union leaders who are not even from the same sector and do not understand their work-related needs,” he explained.

Rudy said the destruction of unions by employers would also increase with the proliferation of “yellow unions”, a term for unions that did the bidding of employers.

Coalition member and National Union of Bank Employees (Nube) assistant secretary-general A Karuna described the amendments as extremely regressive that had an adverse effect on workers’ rights in sole collective negotiations.

“In a situation of multiplicity, disagreements and complications over which union will be recognised to hold collective bargaining talks with employers will arise and these complications stand to stall the negotiation process.

“This can result in unprecedented delays in revising the collective agreements, exceeding the usual five-year term and causing a delay in improving workers’ rights to suit changing market trends.”

Referring to the European model of trade unionism, Karuna said a trade union did not have to prove it had 51 percent of workers’ support before engaging the company in collective bargaining discussion.

She said workers in Europe were also free to join any union in any industry as they were general unions.

“The government has not removed the distinction of ‘establishment trade’ and ‘industry’ to introduce general unions, instead of a multiplicity of unions,” she explained.

Karuna also explained that the government’s ratification of the Comprehensive and Progressive Agreement for Trans-Pacific Partnership (CPTPP) had little to do with the amendments.

She also said the revised version of the multilateral trade agreement with 11 countries no longer has a labour chapter to comply with.

Meanwhile, Karuna said the International Labour Organization (ILO) promotes freedom of association in its conventions but the new powers bestowed upon the director-general of trade unions (DGTU)  in the Trade Unions (Amendment) Bill allows unfettered interference in the right.

Rudy also explained that Section 63A to 63E of the amendments introduced new powers for the DGTU which included the authority to conduct checks on trade union offices and confiscate documents.

Coalition member and National Union of Petroleum and Chemical Industries Worker (NUPCIW) secretary-general Abdul Halim Mansor asked if the government was prepared for unions in the public and private sectors trade unions to merge.

“This is what will happen in an environment of a multiplicity of unions.

“This will also introduce the right to collective bargaining in a more holistic manner which encompasses trade unions from different sectors without a majority support,” he asked.

Halim was also concerned that the government was only introducing certain provisions in the ILO’s convention on freedom of association.

“We urge the government to ratify the ILO Convention 087 on the Freedom of Association and the Right to Organise before making drastic changes to the law.

“The ratification is based on the will of the government,” he said.