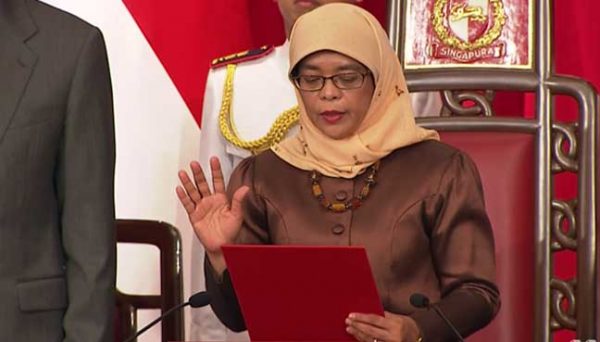 SINGAPORE: Halimah Yacob was sworn in as Singapore’s eighth President at the Istana today, marking her first day of a six-year term.

“I, Halimah Yacob, having been elected President of the Republic of Singapore, do solemnly swear that I will faithfully discharge my duties,” she said in her oath-taking, which was witnessed by Singapore Prime Minister Lee Hsien Loong and Chief Justice Sundaresh Menon.

In her speech after the swearing-in as President, Halimah said, “I know that some Singaporeans would prefer to achieve this without needing reserved elections. I respect their views.”

The Singapore Presidential Election 2017 is reserved for the Malay community.

“Like them, I look forward to the day when we will no longer need to rely on the provision to have reserved elections, and Singaporeans naturally and regularly elect citizens of all races for president.

Halimah gave an assurance to all Singaporeans that “as your president, I will serve every one of you, regardless of race, language or religion”.

Four years ago, she was appointed Singapore’s first female Speaker of Parliament.

She ventured into politics in 2001 and has been a Member of Parliament for the Jurong Group Representation Constituency (GRC) and Marsiling Yew-Tee GRC.

Halimah, who was declared President-elect on Wednesday, is also the first Malay head of state in 47 years.