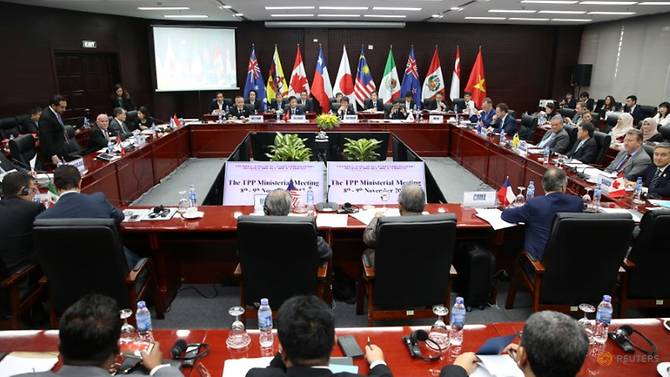 SINGAPORE: Eleven countries have officially concluded negotiations on a new trade pact after the United States dropped out of the Trans Pacific Partnership last year.

All parties will now work towards signing the agreement by early March this year, said Singapore's Ministry of Trade and Industry (MTI) on Tuesday (Jan 23).

Details of the new trade pact, called the Comprehensive and Progressive Agreement for Trans-Pacific Partnership (CPTPP), were finalised after a two-day meeting that ended on Tuesday in Tokyo.

This followed an earlier round of meetings in Da Nang, Vietnam in November last year, when ministers agreed on core elements of the CPTPP that would incorporate all commitments from the original TPP, except for a limited number of provisions suspended temporarily.

However, sticking points remained, such as Canada's insistence on protection of its cultural industries such as movies, TV and music.

At this round of meetings in Tokyo, officials resolved the oustanding issues, finalised the list of suspended provisions and completed the legal verification of the agreement, MTI said. "With that, negotiations on the CPTPP have been concluded," the ministry added.

Minister for Trade and Industry (Trade) Lim Hng Kiang said Singapore is "pleased by the good outcome on the CPTPP".

"We have made significant efforts to uphold the spirit and substance of the original Agreement, while maintaining its high ambition and overall balance," he said.

"The CPTPP will enhance trade among countries in the Asia-Pacific, resulting in more seamless flows of goods, services, and investment regionally.

"Singapore companies will gain from the substantial elimination of tariffs and non-tariff barriers for goods, improved access for service suppliers in a wide range of sectors, greater facilitation of investments, and improved access to government procurement contracts," Mr Lim added.