SANTIAGO (Reuters) - Eleven countries including Japan and Canada signed a landmark Asia-Pacific trade agreement without the United States on Thursday in what one minister called a powerful signal against protectionism and trade wars.

The deal came as U.S. President Donald Trump vowed earlier in the day to press ahead with a plan to impose tariffs on steel and aluminum imports, a move that other nations and the International Monetary Fund said could start a global trade war.

The Comprehensive and Progressive Agreement for Trans-Pacific Partnership (CPTPP) will reduce tariffs in countries that together amount to more than 13 percent of the global economy - a total of $10 trillion in gross domestic product. With the United States, it would have represented 40 percent.

“Today, we can proudly conclude this process, sending a strong message to the international community that open markets, economic integration and international cooperation are the best tools for creating economic opportunities and prosperity,” said Chilean President Michelle Bachelet.

Even without the United States, the deal will span a market of nearly 500 million people, making it one of the world’s largest trade agreements, according to Chilean and Canadian trade statistics.

The original 12-member agreement, known as the Trans-Pacific Partnership (TPP), was thrown into limbo early last year when Trump withdrew from the deal three days after his inauguration. He said the move was aimed at protecting U.S. jobs.

The 11 remaining nations finalized a revised trade pact in January. That agreement will become effective when at least six member nations have completed domestic procedures to ratify it, possibly before the end of the year.

“We are very hopeful like others that we will see the CP TPP coming into effect about the end of the year or shortly thereafter,” said Australia Trade Minister Steven Ciobo.

The revised agreement eliminates some requirements of the original TPP demanded by U.S. negotiators, including rules to ramp up intellectual property protection of pharmaceuticals. Governments and activists of other member nations worry the changes will raise the costs of medicine.

The final version of the agreement was released in New Zealand on Feb. 21. The member countries are Australia, Brunei, Canada, Chile, Japan, Malaysia, Mexico, New Zealand, Peru, Singapore and Vietnam.

In January, Trump, who also has threatened to pull the United States out of the North American Free Trade Agreement, told the World Economic Forum in Switzerland that it was possible Washington might return to the TPP pact if it got a better deal. However, New Zealand’s trade minister said that was unlikely in the near term, while Japan has said altering the agreement now would be very difficult.

On Thursday, Munoz said CPTPP was not an agreement against anyone and several governments had said they want to join it. 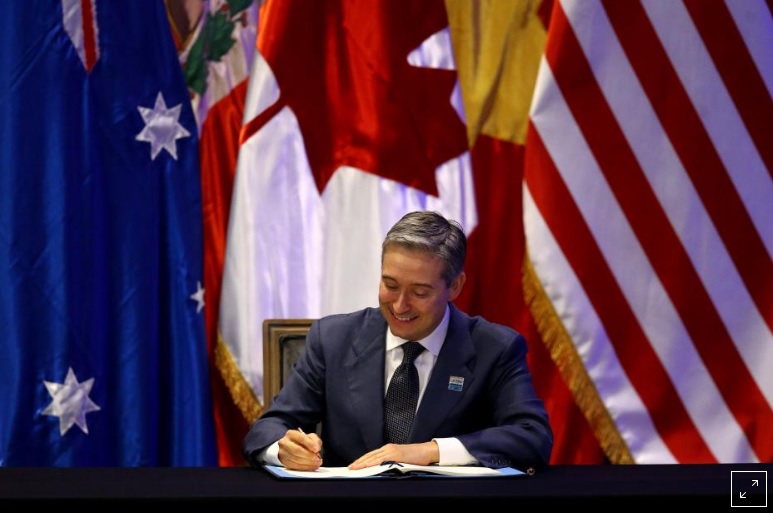