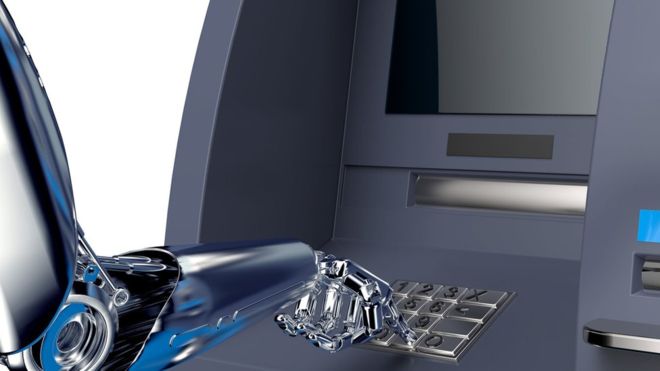 Artificial intelligence will be the main way that banks interact with their customers within the next three years, a report from consultancy Accenture has suggested.

Banks such as Royal Bank of Scotland (RBS) are increasingly using chatbots to answer customer queries.

The report examined the views of 600 bankers and other experts.

"The big paradox here is that people think technology will lead to banking becoming more and more automated and less and less personalised, but what we've seen coming through here is the view that technology will actually help banking become a lot more personalised," said Alan McIntyre, head of the Accenture's banking practice and co-author of the report, Banking Technology Vision 2017.

"(It) will give people the impression that the bank knows them a lot better, and in many ways it will take banking back to the feeling that people had when there were more human interactions."

A similar report conducted by Accenture, looking at consumer attitudes to banking, suggests that customers too are willing to embrace AI.

"With things like Netflix, customers are used to smart AI offering advice in the background and we found consumers are surprisingly willing to accept robotic advice about banking products," Mr McIntyre told the BBC.

In future he envisages banking will be made much simpler - with people able to conduct transactions on social media platforms such as Facebook Messenger and WhatsApp.

Accenture is currently working with a number of UK banks to allow customers to interact with their banks - get balance information and transfer money - via Amazon's smart home speaker Alexa.

He also imagines how banks could use systems such as Alexa to transcribe conversations with customers to cut down on "form-filling".

"Rather than sit down and log on to a website, people want to interact naturally," said Mr McIntyre.

The vast majority of customers, according to Accenture, want both easy digital interactions and the ability to speak to a human.

"People want a dialogue and as AI is more and more able to replicate that, so it doesn't feel like speaking to a machine," he said.

RBS and NatWest began testing an AI customer service chatbot, dubbed Assist, in December and in Sweden, Swedbank's Nina web assistant now has an average of 30,000 conversations per month and can handle more than 350 different customer questions.