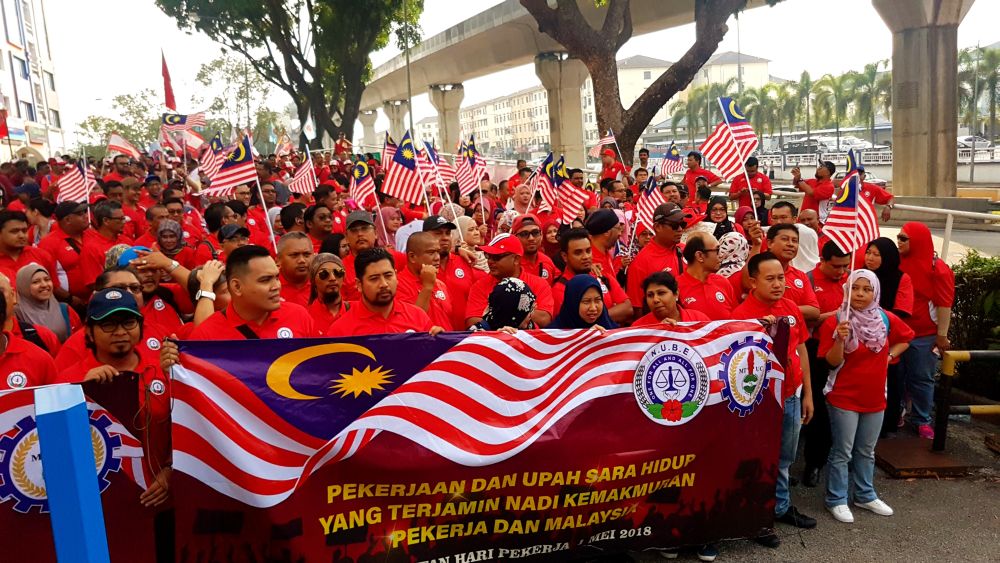 SUBANG JAYA, May 1 — Malaysian and foreign workers in the hundreds rallied for better rights and more pay in the annual May Day gathering organised by the Malaysian Trades Union Congress (MTUC) here today.

The event, which began at 8am at Wisma MTUC in Subang Jaya and themed “Workers’ Rights are Basic Human Rights”, was the first such rally here to feature participation by migrant workers from countries such as Nepal, Bangladesh, Indonesia, Myanmar and the Philippines.

Dressed in red, the attendees urged the government to raise the minimum wage to RM1,800 immediately and undertake to increase this to RM2,700 in five years, basing the demand on a recent Bank Negara Malaysia report.

The groups in attendance also called for the next Malaysian government to adopt this and other demands made today upon winning the general election.

MTUC secretary-general J. Solomon said as the minimum wage in Malaysia is due to be reviewed by the National Wages Consultative Council of Malaysia in July, the group sent their demands to political parties in order for the minimum wage to be increased.

“This is something workers want to see take place. It is in line with the Vision 2020 as well as the government wants Malaysia to become a high income society,” he said.

Other demands made today include a RM3,500 minimum wage for graduates, the formalisation of a RM300 cost-of-living allowance for all workers, and mandatory health and surgical coverage for those in the M40 group and below.

Among others, he vowed that Barisan Nasional (BN) would undertake to raise the minimum wage from its current levels within the next five years.