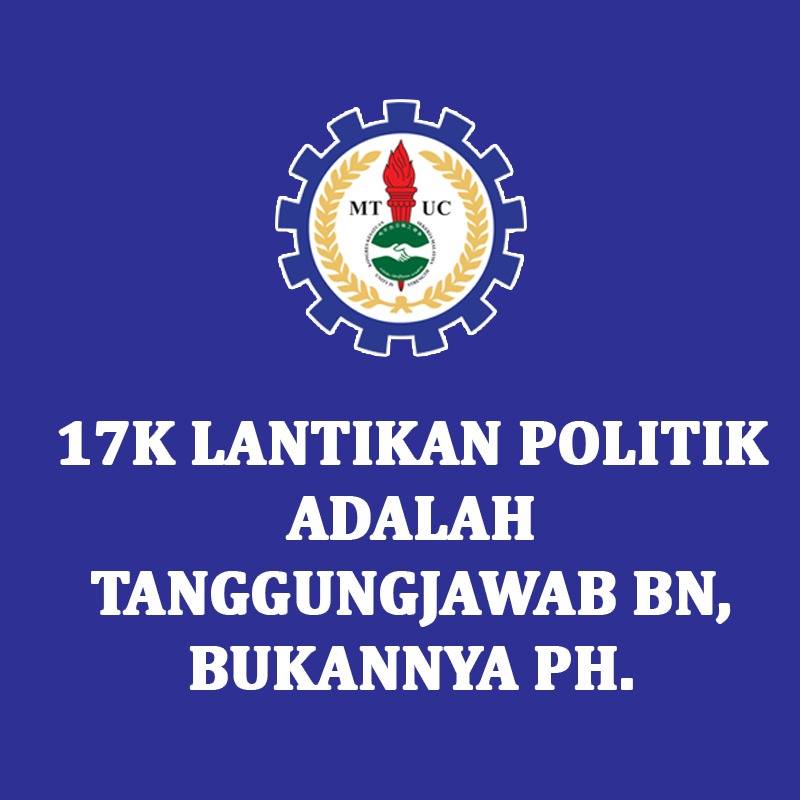 The MTUC is not surprised with the position taken by Mohd Puad Zarkashi, as reported by Malaysiakini nevertheless, the 17,000 individuals appointed by the BN government cannot be equated with workers in the real sense as they are political appointees.

Reality though is that the former government was never concerned about the plight of the common workers. Among the many workers who fell prey to BN’s lackadaisical attitude towards victimized workers were the 1390 workers of Sabah Forest Industry who were temporarily laid off since 1st January 2018. Then you have 27 workers dismissed by Hong Leong Bank when they refused to leave their families responsibilities and accept urban migration. And, many more trade union leaders dismissed for trade union activities, not forgetting the thousands of workers laid off under the guise of Industry 4.0; all of whom were permanent workers in the B40 category, not political appointees.

MTUC, the respective Unions and the workers appealed to the state BN and Federal government repeatedly but they did not have the political will to protect the workers. In fact, under the former Government, Ministry of Finance, Ministry of Human Resources and Bank Negara Malaysia endorsed the laying off.

It may seem unfortunate for the political appointees to be axed at a time when Muslims are observing Ramadhan but Puad must realise the agony of those who lost jobs during the former regime, observed numerous Ramadhan and Syawal without a penny in their pockets. Nevertheless, true statesmanship is thus characterized by YAB Tun and his readiness to retain all low wage workers.

These political appointees were excessive in numbers and were serving their political masters at the expense of the tax payers' monies and one would wonder what could have been their salaries. Therefore, the hue and cry over the axed 17, 000 political appointees and seeking MTUC’s intervention now is nothing but shedding crocodile tears simply to point the finger at the new government.

BN politicians are morally obligated to these political appointees and should take full responsibility for their wellbeing. Surely, the coalition that has been in power for 60 years would have accumulated enough funds to do so.