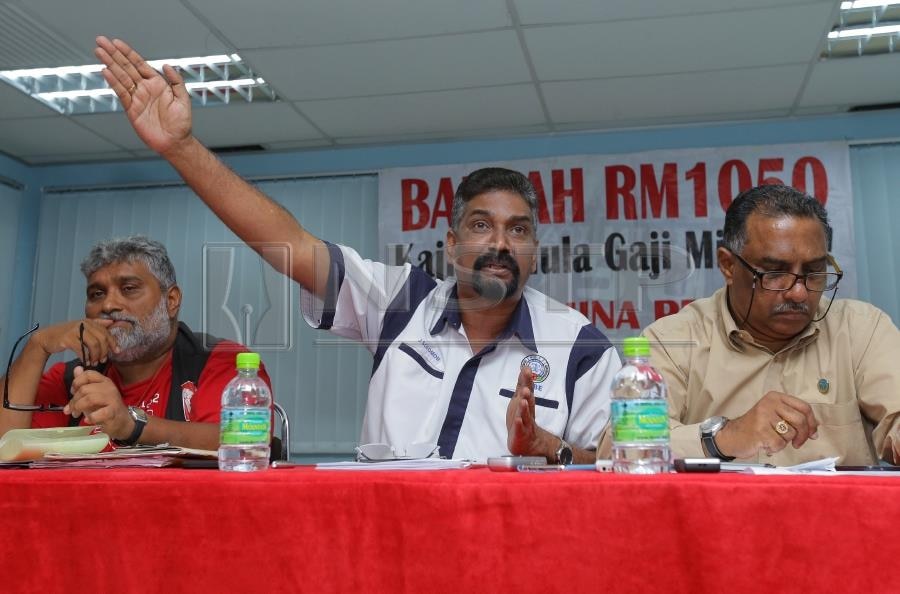 KUALA LUMPUR: The Malaysian Trades Union Congress (MTUC) will hold a protest at Padang Merbok at 11am on Wednesday to call for a review of the minimum monthly wage of RM1,050, which comes into effect on Jan 1, next year.

MTUC secretary-general J. Solomon said they would then march to Parliament House where they would hand over a memorandum of protest to Prime Minister Tun Dr Mahathir Mohamad to set the minimum wage at RM1,800 for private sector workers.

Some 30 non-governmental organisations, including Sisters in Islam, Persatuan Sahabat Wanita Selangor, Tenaganita, Suaram, Parti Sosialis Malaysia and Women’s Aid Organisation have pledged their support for the demonstration, which coincides with the International Day for the Eradication of Poverty.

He said a RM50 increment in the minimum wage would not help the B40 group cope with the high cost of living.

“This is mainly for private sector workers, whose employers, like the GLCs (government-linked companies) have been raking in huge profits. Some of them earn RM100,000 a day.

“MTUC feels that the RM50 increment in the minimum wage is unacceptable. Having seen the high cost of living these days a minimum wage must be at least RM1,800.”

Solomon dismissed the government’s fear about the minimum wage going up without a corresponding rise in productivity. He said a higher minimum wage would lead to greater spending power.

“If you increase the wages of lower income people they will spend more. This will spur the economy so there shouldn’t be an issue that it will effect the economy.

“Besides, the statistics on productivity clearly shows that the trend has always been positive.”

He urged the government to “walk the talk” as Pakatan Harapan had promised to address wealth disparity.

Solomon also urged the Cabinet to make public the National Wage Legislative Technical Committee report which had been used to set the RM50 minimum wage increment.