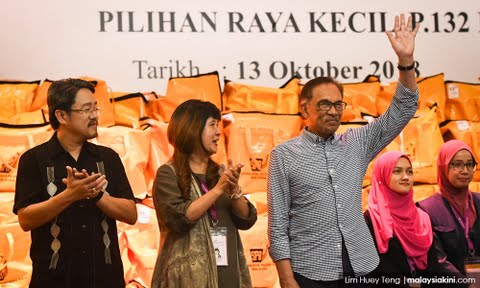 PKR president-elect Anwar Ibrahim has won the Port Dickson by-election with a 23,560-vote majority, and is expected to be sworn in at Parliament on Monday.

Despite the lower turnout, Anwar's 23,560-vote majority eclipses that of PKR's Danyal Balagopal Abdullah, who won the seat in the 14th general election by a margin of 17,710 votes.

An analysis of voting results by Malaysiakini, however, indicates that the outcome may have been different had BN contested.

Four polling districts won by BN on May 9 – Kampong Jimah Baru, Si Rusa, Linggi and Kampong Sungai Raya  – were won by Anwar this time around.

However, voting patterns suggest that although there was some swing towards Pakatan Harapan, many BN supporters appear to have boycotted the by-election.Meanwhile, all independent candidates, including former Umno vice-president Mohd Isa Abdul Samad, will lose the security deposits submitted to the EC to contest in the by-election.

Candidates have to obtain at least one-eighth of the total votes cast in order to secure a deposit refund.