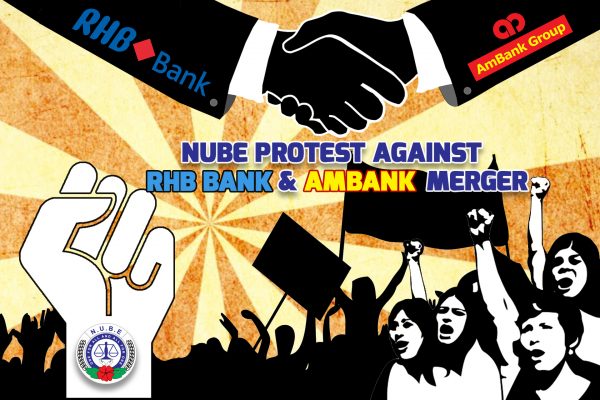 RHB Bank is a party to the MCBA/NUBE Collective Agreement but to date; it has not informed NUBE or discussed regarding the proposed merger.

We are sceptical of this merger because economic analysis in media reports perceived the combined cost to income ratio of the merged entity would increase, due to which around 80 to 100 branches and 4,000 employees could be scaled down. Analysis also reveal that the proposed merger will only be beneficial to AmBank (M) Bhd and not RHB Bank.

It must be remembered that the major shareholder of RHB Bank is the Employees’ Provident Fund (EPF) which is workers fund, our monies.

In view of the above and our past experiences of job losses and tremendous hardship caused to workers due to mergers in the banking industry, NUBE is protesting against the proposed merger until and unless immediate effective social dialogue is commenced with NUBE.

Members are advised to report any concerns/information you may have regarding this proposed merger.

One for all and all for one,