Minister: No plans to raise GDP forecast for now 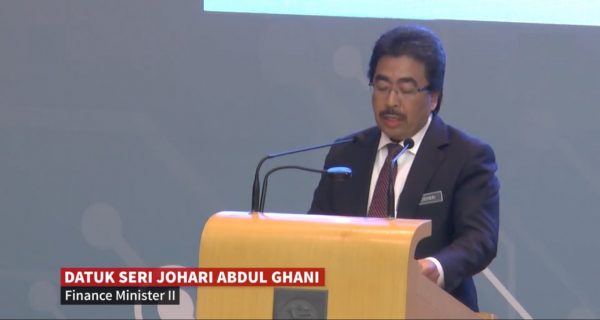 KUALA LUMPUR: The government has no plans to raise its growth forecast of the Malaysian economy at this juncture despite the optimism following a stronger-than-expected performance in the first quarter of 2017.

According to Second Finance Minister Datuk Seri Johari Abdul Ghani, it is still too early to consider the robust first-quarter gross domestic product (GDP) growth as an indication to revise upwards the official forecast of the country’s growth, as the trend is merely reflective of global trends.

“It is still too early to talk about revising our GDP growth forecast. We have to wait and see … all these positive impact on the first-quarter GDP is in line with the improvements in the global economy,” he said.

Last week, Bank Negara revealed that Malaysia’s GDP in the first three months of the year grew 5.6%, which significantly exceeded consensus estimate of 4.6%.

“The government will maintain its GDP growth forecast at a range of 4.2% to 4.8% this year at this juncture, while continuing to assess the global situation,” Johari said.

He was speaking to reporters after delivering a keynote address in conjunction with the launch of the Knowledge & Research Report entitled “Financial Inclusion in Malaysia: Distilling Lessons for Other Countries” at the 2017 Global Symposium on Microfinance.

The two-day symposium is co-organised by Bank Negara and the World Bank Group Global Knowledge and Research Hub in Malaysia.

According to the report, Malaysia has achieved one of the highest levels of financial inclusion among South-East Asian countries, due in part to policies taking advantage of mobile phones and banking agents to expand access.

The Global Findex Database of the World Bank, which collects data on financial inclusion in countries around the world every three years, revealed that 81% of Malaysia’s adults had an account at a licensed financial institution in 2014. Globally, 61% of all adults have accounts.

“Currently, there are still 8% of unbanked population in Malaysia … we hope to reduce this to 5% by 2020,” Johari said.

He noted that in Malaysia, the percentage of banking customers with active deposit accounts, an indication that they are conducting basic financial services regularly, had increased from 92% from 87% in 2011.

He attributed this achievement to long-term development plans and policies in the country, strong financial infrastructure and an enabling regulatory environment to support innovation in the financial sector.

Johari said the government remained committed to expand the level of financial inclusion to a new height, leveraging on Internet and technology as new enablers, in addition to other existing tools.

“The level of financial inclusion in Malaysia in 2015 based on the Financial Inclusion Index is relatively high at 0.9 with one reflecting full inclusion.

“However, there remain areas that we have to focus on and intensify our efforts urgently, namely financial literacy and financial health,” Johari pointed out.

The World Bank report noted that Malaysia faced two main challenges in financial inclusion. First, Malaysia would need to reach out to the remaining under-served population; second, a major challenge would be to ensure that people with access to financial services actually make active use of their accounts.

“Access to finance is critical for lifting people out of poverty. Having bank accounts and being able to save and get credit helps people and firms make plans, consume and invest for the long term, and also manage unforeseen short-term shocks,” World Bank country director for South-East Asia Ulrich Zachau said.