Customs: GST is good, no need to do away with it 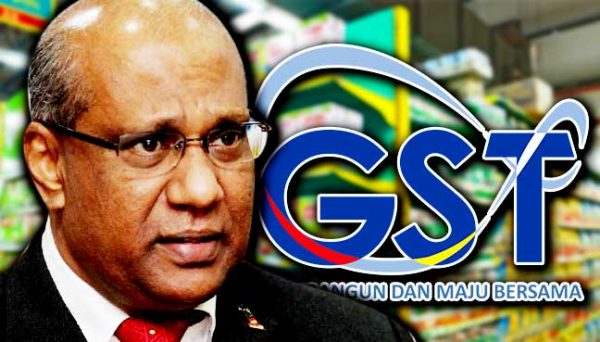 Customs department DG T Subromaniam says GST has many benefits and this is why it is adopted by 170 countries, including nations renowned for good and transparent governance.

PETALING JAYA: The customs department says critics of the goods and services tax (GST) must adopt a more holistic view of the tax in the wake of PKR’s Wong Chen saying the GST could be abolished.

Over the weekend, in an interview with FMT, Wong gave Malaysians a glimpse of a Pakatan Harapan-led Malaysia, which included the abolition of the GST – introduced two years ago at 6%.

The Kelana Jaya MP had said that the shortfall from the abolition of the GST – to the tune of RM25 billion a year – could be saved through “good governance”, which he claimed would reduce wastage and corruption by almost the same amount.

But customs department director-general T Subromaniam said the GST had many benefits and this was why it was adopted by some 170 countries worldwide, including nations renowned for their good and transparent governance.

According to the Legatum Prosperity Index 2016’s sub-index on governance – which ranks a country’s performances in effective governance, democracy, political participation and rule of law – the top five countries with the best governments were Finland, New Zealand, Norway, the Netherlands and Sweden.

All five countries have the GST, which is known in some countries as “value added tax” (VAT).

“Is Wong implying that these 170 countries, which have the GST, don’t have good governance?”

Subromaniam told FMT that the issue of GST needed to be viewed from a more holistic point of view as it was a much better tax system than previous systems.

As an example, through the GST, Subromaniam said foreigners in Malaysia – both legal and otherwise – couldn’t escape paying their dues for using public facilities paid for by Malaysian taxpayers.

“We have many foreign workers in the country, and minus the small number of expatriates, the rest don’t pay income tax. Yet, they enjoy public facilities and infrastructure. The same goes for tourists.

“This is why we need a broad-based tax. Otherwise, it is only locals who will be shouldering the burden.”

According to human resources ministry figures, there are some 2.1 million legal foreign workers in the country.

Some, like the Malaysian Employers Federation, estimate that there are some six million legal and illegal foreign workers in the country.

Subromaniam pointed out that in Singapore, a quarter of the GST revenue came from foreigners.

“GST is meant for future generations. It will make Malaysia more competitive and put our finances on a strong footing.”

The CIA involves the Inland Revenue Board, customs department and the Companies Commission of Malaysia. The three authorities share information to better detect fraud and tax evasion.

Don’t try to reinvent the wheel

Veteran economist Hoo Ke Ping, meanwhile, said if PH wrested Putrajaya from BN, it shouldn’t “try to reinvent the wheel” by abolishing the GST or looking at another tax system.

He said this was because it was an “undeniable fact” that the GST is the most preferred tax system in the world.

He said he disagreed with Wong that the problem with the sales and services tax (SST) lay in the reporting system, pointing to examples of countries with efficient governance and enforcement.

“Look at Singapore. Can you say that their governance or enforcement is lenient? They are highly efficient and strict and yet they opted for GST. Why? It’s because GST is very comprehensive.”

With GST, Hoo said, taxes are paid based on consumption and there are no hidden costs, while it also helps combat the “shadow economy”.

This “shadow economy” refers to the goods and services produced alongside those in the formal economy – that are paid for in cash and not declared for tax.

It also includes illicit funds from corruption, illegal gambling, drugs and smuggling, among others.

In 2015, then deputy finance minister Ahmad Maslan said the World Bank estimated Malaysia’s “shadow economy” to be about 30% of the country’s gross domestic product (GDP).

The GST makes it less feasible to engage in the “shadow economy” because traders who purchase goods or services from the black market won’t be eligible to claim input tax and this would increase their cost of doing business.

But Hoo said this doesn’t mean that the “shadow economy” couldn’t exist even with the GST.

“As an example, how did the people behind JJ Poor to Rich (JJPTR) investment scheme manage to allegedly move millions overseas?

“The Anti-Money Laundering, Anti-Terrorism Financing and Proceeds of Unlawful Activities (Amla) Act 2001 contains provisions for preventive measures to be taken by the authorities without waiting for a complaint, but still they failed to act before it was too late.”

Hoo said that this was a failure of enforcement of the law and this should be Pakatan Harapan’s focus, rather than trying to “fix what wasn’t broken” or resorting to a tax system that wasn’t tried and tested.

Citing sources, The Star recently reported that investigations into JJPTR suggested “tens of millions of ringgit” may have been moved to overseas accounts and that there was no evidence that the company’s computers were hacked, as claimed by its founder Johnson Lee.

Police have alleged that thousands have fallen victim to the controversial JJPTR investment scheme, which is believed to have swindled investors of RM1.7 billion.