PM thanks MPs for Budget 2021 support 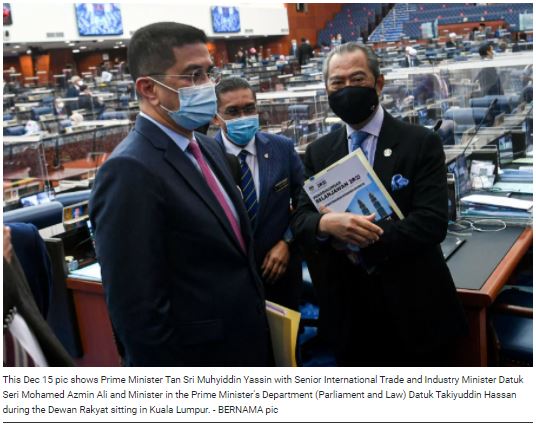 KUALA LUMPUR: Prime Minister Tan Sri Muhyiddin Yassin has expressed his appreciation to all Members of Parliament, especially those from the Perikatan Nasional Backbenchers Club (PNBBC), for their support which enabled the national budget, or the Supply Bill 2021, to be passed at the Dewan Rakyat on Tuesday.

Muhyiddin said the support is testimony to the concern and togetherness of government MPs in ensuring the welfare and well-being of the people; and that the nation's economic recovery plans can now be implemented as planned.

"I would also like to (emphasise) the importance of continuing to provide the best services to the community, and to take good care of the areas represented," he said in a statement on his Facebook page last night.

Muhyiddin had extended his appreciation to the MPs in a short speech at a lunch event held at Parliament on Wednesday.

The budget, tabled for the third reading by Finance Minister Tengku Datuk Seri Zafrul Abdul Aziz, was passed after 111 MPs voted in favour, 108 against, and one MP was absent.

The bill had undergone 10 days of debate and winding up by every ministry at the committee stage after it was passed at the policy stage on Nov 26. - Bernama