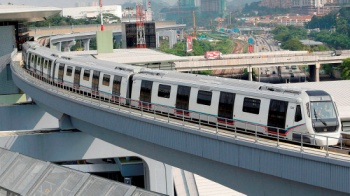 Deputy Finance Minister Datuk Wira Othman Aziz said this number was encouraging as the service was still not integrated with other train services like the Light Rail Transit system and the Monorail.

“City folk will gradually accept taking the MRT as their new way of life and hopefully when all the MRT routes are ready (SBK Phase 2 and Sungai Buloh-Serdang-Putrajaya route), the public will use the rail transport system more,” he told reporters after a working visit to the Sungai Buloh MRT depot, here, today.

“To date, the SBK MRT route receives about 15,000 passengers each day and this number is expected to increase to 150,000 once Phase 2 which covers the remaining 19 stations from Semantan and Kajang begins operations in July,” Othman said.

He said in order to encourage city folk to use public transport, shuttle buses were being provided to ferry passengers to the MRT stations and the parking areas.