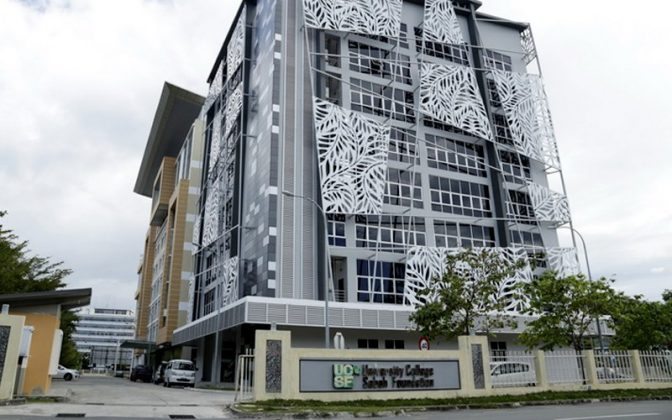 KOTA KINABALU: There seems to be no end in sight to the plight faced by University College Sabah Foundation (UCSF) staff whose salaries have been cut by half despite assurances from the state government that help is coming.

Sabah Malaysian Trades Union Congress (MTUC) secretary Catherine Jikunan said that although chief minister Hajiji Noor had promised to resolve the issue, saying that he would summon the UCSF management to explain the reimposition of the 50% pay cut, nothing had happened.

“So far, there has been no solution,” she told a press conference here today.

Jikunan said they received word that the state government had channelled funds to the UCSF through Sabah Foundation, which owns the college, believed to resolve the issue of unpaid salaries.

However, she said the workers subsequently only received 75% of their April 2021 salary but that wages owed to them from last October to March this year had not come through.

“The workers are in a quandary now, wondering what will happen to their salaries for the next and subsequent months.

Jikunan said 35 of those affected had filed claims with the state labour department over the unpaid salaries from the college. A hearing was held this morning but no decision was reached.

“That is why we are pleading to the state government to step in,” she said.

“When the funds came in from the state, the UCSF management should have prioritised the workers … we are also unsure what the state government’s directives were (over the salary payments).

“We are urging the new state government to deliver on its pledge and quickly resolve this matter because most of those affected are B40 workers … they have families to feed. Hari Raya is also coming,” she said.

A spokesperson for the 146 college staff affected by the pay cut had previously said they received only half of their salaries since September 2020, and had asked the state government to intervene.

The staff first received an internal memo in June 2020 from UCSF vice-chancellor Mohamed Haleem Mohamed Razi announcing a temporary pay cut as part of austerity measures in light of a plunge in student intake for the April semester.

The spokesperson said the staff received their full salary from June to August, but in September, after the Sabah election when Warisan lost to the Gabungan Rakyat Sabah coalition, the 50% pay cut was reimposed.

Under the cost-cutting scheme detailed in the June 2020 memo, staff would be subject to a 50% pay cut with working hours reduced to 20 per week, or three days a week.

Jikunan said the UCSF management kept on using poor student enrolment as an excuse to not pay the workers’ salaries.

“But is that (poor enrolment) the workers’ fault? Isn’t that the management’s responsibility to do the marketing and improve the college’s image?

“We were also surprised with a recent statement by deputy chief minister Jeffrey Kitingan that he would resolve the college’s financial woes and also elevate the UCSF to be a global institution.

“We are all for that but how will that be achieved when the workers’ salaries are not even paid?” she asked.

Jikunan also disclosed that parents of ex-students from the college had approached Sabah MTUC as their children’s diplomas have not been accredited.

“The children are now in trouble be it to further their studies or to look for jobs because their papers are not recognised,” she said.

“These parents had to secure loans, some even had to mortgage their properties to bear the cost for their children’s studies. It is really unfair that something like this is happening,” she said.