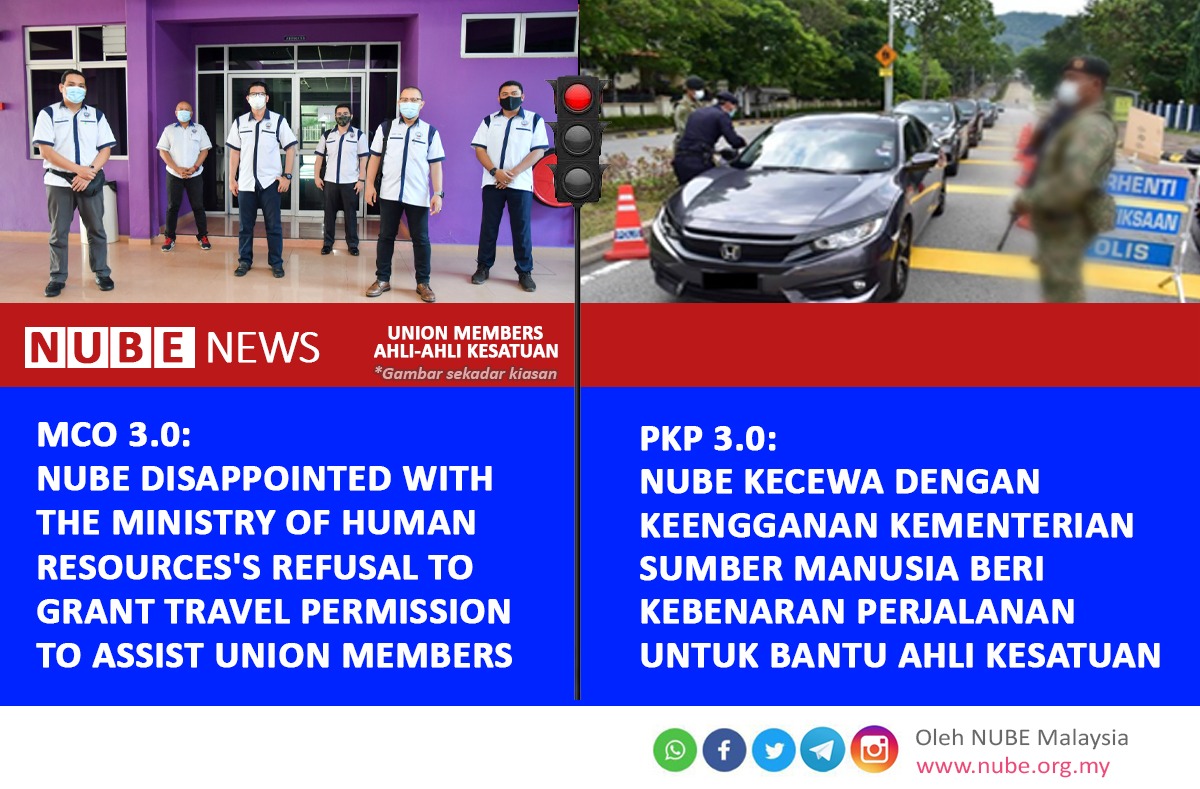 1. As a fully responsible entity representing workers, the National Union of Banking Employees (NUBE) has always supported the efforts taken by the Government in combating the COVID-19 pandemic that has plagued the country over the past year.
2. At the same time NUBE, as a union from a concerned sector, needs to continue to provide effective services to our members who are part of the front liners, especially during the current 3.0 Movement Control Order (PKP).
3. Although we have written to the Department of Trade Union Affairs, Ministry of Human Resources based on the criteria set by the Government but did not get the appropriate approval.
4. After a series of email communications, the Ministry of Human Resources asked NUBE to provide justifications for the travel permission application and after we had provided justifications, they only responded on June 8, 2021, which is yesterday. In their response, the Department informed that it would not issue any travel permission letter, instead asking NUBE to obtain a "one off permission letter for a limited period from the Royal Malaysian Police (PDRM)" for the purpose of salary payment.
5. Trade unions including NUBE are not regulated by PDRM but come under the Department of Trade Union Affairs and the Ministry of Human Resources. In the early stage of PKP 3.0, when we referred to the PDRM, and they advised us to obtain travel permission from the Ministry of Human Resources as we are subject to the Ministry.
6. The Ministry of Human Resources asked us to close the office, while they at the same time conspired with HSBC Bank Malaysia (HSBC) by giving approval for the implementation of VSS and MSS.
7. Apart from being disappointed with the relatively inconsistent SOP in issuing travel permission letters, NUBE is also upset and disappointed with the attitude of the Department of Trade Union Affairs and the Ministry of Human Resources which are not concerned at all with the welfare of union members from the B40 and M40 groups.
8. Once again, I would like to emphasize that NUBE needs to provide effective services to our members who are on duty when banking services are among the necessary sectors under the current PKP 3.0 period. The scope of NUBE’s duties is not just in providing salaries to NUBE employees, but more than that. NUBE believes that the Department and the Ministry do not understand this aspect.
9. In addition, there are also issues that need to be acted upon at an immediate rate involving the interests of NUBE members. This includes the issue of the implementation of VSS and MSS by HSBC, which currently involves 600 employees from B40 and M40 groups. HSBC has announced the implementation of VSS and MSS on the third day PKP 3.0 is implemented, which is on 3 June 2021. The Ministry of Human Resources and the Department identified on the matter and yet recognised this damning act and allowed workers to be harassed.
10. HSBC management itself has informed NUBE that the Ministry of Human Resources has no impediment to retrenchment through VSS and MSS and, the implementation was announced when the people including NUBE members were faced with PKP 3.0.
11. Our big question is, can’t NUBE Officers and Staff to be given travel permission during PKP 3.0 to safeguard their welfare and interests and to protect employees from 24 Banks during the current pandemic and especially those are given VSS and MSS by HSBC?
12. NUBE does not ask for anything outrageous. On the other hand, only travel permission to NUBE Headquarters in Kuala Lumpur is against 60% of employees to keep our members, from the B40 and M40 groups, from being severely affected due to the pandemic and the implementation of VSS and MSS by HSBC.
13. For the record, many countries bound by the International Labour Organization (ILO) Convention, allowing their unions to continue to function during the enforced ‘lockdown’. On the other hand, this could help reduce the government’s burden in addressing the impact of COVID-19.
14. Therefore, NUBE would like to emphasize that the action of the Department of Trade Union Affairs in refusing to grant movement permission is contrary to the ILO Convention, of which Malaysia is one of the signatories of the provisions.
15. NUBE sees that we have no Government that taking care of the welfare of the poor and weak rakyat, but a Government that taking care of the interests of corporate companies and bullies who persecute workers and poor rakyat as witnessed today. The Ministry of Human Resources is destroying workers’ rice pots and trying to cripple trade unions as irresponsible employers do.
16. If this Government continues to function in this way, then we have to seek the intervention of the Yang di-Pertuan Agong to save Malaysia.

17. In this regard, NUBE hopes that the Ministry of Human Resources will review its stance and will grant travel permission for us to take the next steps, thus providing the best service to our members and to the people in general.
18. NUBE would also like to reiterate its commitment that as a responsible trade union, all SOPs related to PKP 3.0 will continue to be complied with to combat the COVID-19 pandemic vigorously.