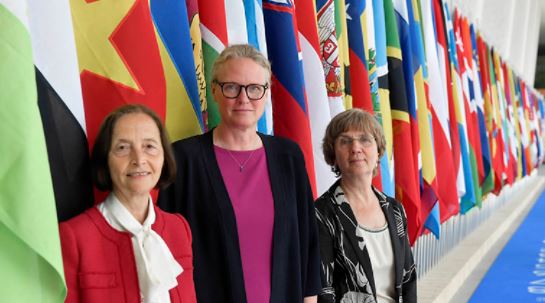 At its 342nd session, the ILO’s Governing Body elected a new Chair and Vice-Chairs, and discussed a number of items arising from the June session of the International Labour Conference.

GENEVA (ILO News) - The Governing Body of the International Labour Organization (ILO) held its 342nd session , virtually, on Friday 25 June, and elected its Officers for the period 2021-2022.

Ambassador Anna Jardfelt Melvin of Sweden was elected as Chairperson and Renate Hornung-Draus of Germany as Employer Vice-Chairperson. Catelene Passchier (Netherlands) was re-elected as the Worker Vice-Chairperson. For the first time in the ILO’s history the Governing Body will have female tripartite leadership.

During the meeting the Governing Body discussed questions arising from the recent June segment of the 109th International Labour Conference  (ILC), including the urgent Resolution on Myanmar  adopted by the Conference. The Director-General was requested to report on developments in the country to the 343rd session of the Governing Body  in November.

The Governing Body adopted the Report of the Committee on Freedom of Association . It also received an update on compliance by the Bolivarian Republic of Venezuela with the recommendations of the Commission of Inquiry.

The Governing Body made an urgent call  on all Members States to intensify their efforts to deal with the critical situation of seafarers and the crisis faced by the maritime sector due to the COVID-19 pandemic .

The Governing Body also finalised arrangements for the election of the next Director-General in 2022.

The ILO Governing Body takes decisions on ILO policy, decides the agenda of the ILC, adopts the draft Programme and Budget  of the Organization for submission to the Conference, and elects the Director-General. It meets three times a year, in March, June and November. Its next meeting is expected to be held 1-11 November 2021.