#HartalDoktorKontrak: Why some health workers are forced to plan a strike amid Covid-19 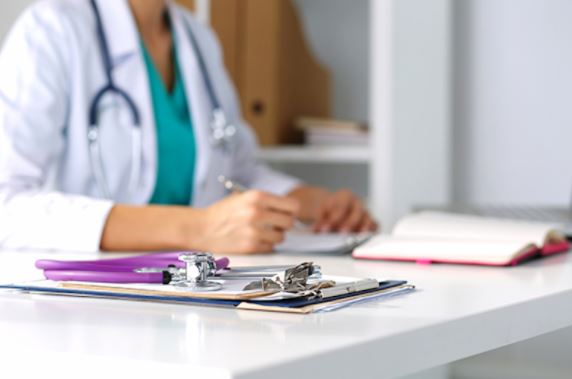 KUALA LUMPUR, June 30 ― With Malaysia still mired in the Covid-19 pandemic, a group of contracted medical officers has proposed a work strike on July 26 over discontentment with the government’s contract system.

It is learnt that the disgruntled group of health workers have been gathering participants via social media to protest their alleged mistreatment by the government due to their status as contract staff, in a planned one-day nationwide strike dubbed “Hartal Doktor Kontrak Seluruh Malaysia”.

Since the pandemic began, contract doctors’ issues have become hotly debated within the medical profession, after it was reported that over 23,000 contract doctors in government service who graduated since December 2016 have not been automatically absorbed permanently like in the past.

The movement first gained considerable traction on Twitter through the hashtag #HartalDoktorKontrak.

Before the strike on July 26, the group is also expected to submit a memorandum the the Ministry of Health tomorrow (July 1), followed by a media conference to highlight what some have described as “modern-day slavery”.

The word “hartal” has its roots in the Gujarati language from the Indian state of Gujarat in the Indian subcontinent.

It generally signifies the closing down of shops and warehouses with the goal of satisfying a demand, with the term effectively institutionalised when then anti-colonial activist Mahatma Gandhi ― who hailed from Gujarat ― used the term to refer to his pro-independence general strikes.

Hartal was used for the first time in Malaya by the left-wing coalition, Putera-AMCJA (Pusat Tenaga Ra’ayat and the All-Malaya Council of Joint Action) as a weapon against the British colonialism in 1947 when it protested the formation of the Malayan Union.

In Malaysia, the word has been used to signify a strike as a way to express dissent.

What is a contract doctor?

This system was introduced by the Najib administration in December 2016 after it was announced as part of Budget 2017.

The contractual appointment is given in two stages: three year for medical graduates’ housemanship completion in the first stage and an additional two years given to fully registered medical officers if not absorbed permanently.

No third extension is given.

For those who underwent their housemanship abroad, they are only offered a contractual appointment once for a period of two-years upon their return to Malaysia. Those who are not absorbed into the permanent scheme are considered terminated and must leave the public sector.

Why are they planning for a strike?

One of the key issues plaguing the contract system is the inability for affected medical graduates to qualify for specialist training through the Health Ministry’s sponsored “Masters programme” as it is exclusively for those with permanent postings.

Although there remains an alternative called the “parallel pathway” where trainees may opt for one of the programmes of the Royal Colleges of the United Kingdom or Ireland, many without government assistance are unable to shoulder the financial burden of accompanying tuition fees.

A medical graduate who is unable to choose either method as career advancement could find themselves unemployed once their contract ends, which may inadvertently lead to a shortage of potential medical doctor candidates in the public health sector.

This also caused uncertainty over their employment in the government service and future as healthcare professionals.

There also exists inequality as contract doctors do not receive similar welfare benefits such as “hazard leave” and wages enjoyed by their fellow peers with permanent status.

As the campaign gained momentum, politicians from both sides of the divide have also lent their voices and endorsed the group’s struggle.

However, the campaign has also met with objections from the Malaysian Medical Association (MMA), which have said such action was unacceptable with the Covid-19 pandemic ongoing.

Instead, the MMA’s Section for Housemen and Medical Officers (SCHOMOS) said it planned for a day of solidarity for contract doctors and reassured them that they were currently working with the authorities to resolve their issues.

“MMA SCHOMOS would like to advise members of our fraternity against a work strike. The consequences of doing so can be disastrous and we remain with our stand that we do not condone a work strike and do not want patient care to be compromised at any point in time, especially so during a pandemic,” it said in a Facebook post.

Yesterday, MMA had also extended its call for the public to change their social media profile photos to black or monochrome, to join its “Code Black” campaign urging medical officers to wear black in support of the contract doctors. 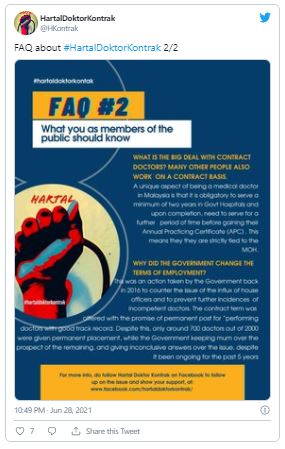 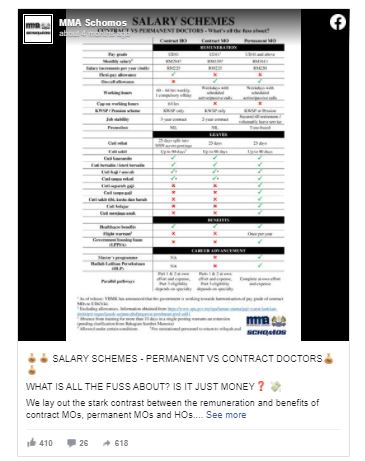