HSBC ACCUSED OF 'BLATANT AND INDEFENSIBLE' FOREX FRAUD BY EX-CLIENT 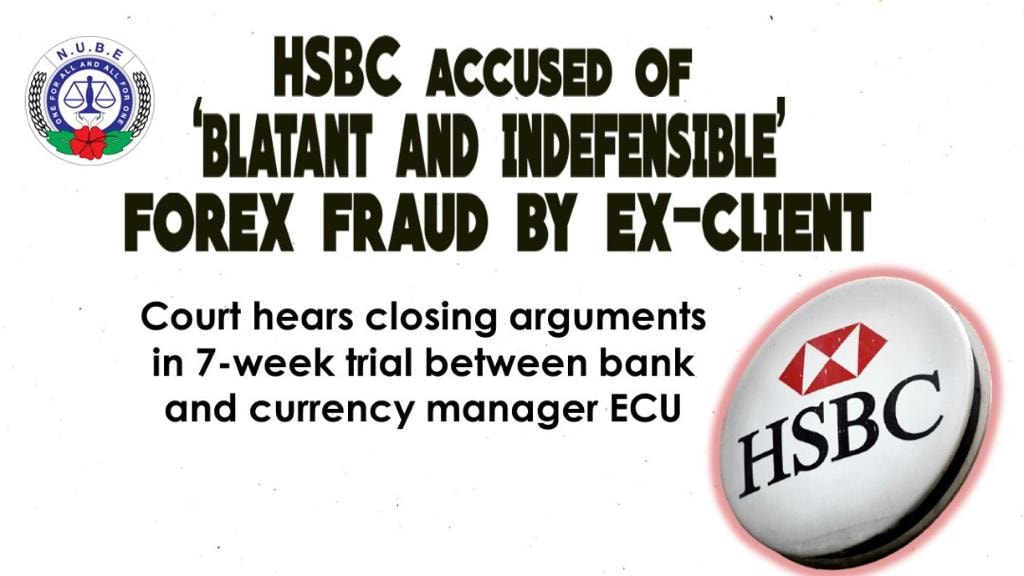 Funding supervisor ECU made its closing submissions on Tuesday on the finish of a seven week trial wherein it’s suing HSBC over foreign money trades made greater than 15 years in the past. The trial is the most recent instalment within the international foreign money buying and selling scandal that began almost 10 years in the past and has price the London-listed financial institution greater than $600mn in regulatory fines.

ECU Group alleges that FX merchants at HSBC misused confidential details about its trades and used them for their very own revenue between 2004 and 2006, pinpointing 52 transactions in that interval. ECU was a consumer of HSBC on the time of the trades. HSBC has denied all wrongdoing.

routinely” tried to revenue from consumer orders, pointing to a chat hosted on the Bloomberg terminal between Stuart Scott, HSBC’s head of money FX in Europe, and Paul Mischenko, head of FX for the Americas, from January 2010. Within the change, Scott advised his counterpart that his crew all the time makes cash from so-called cease loss orders, the kind of trades ECU claims HSBC have been entrance operating.

“It’s a simple boast, that HSBC’s London buying and selling desk may and would entrance run any consumer’s order whatever the consumer’s degree of sophistication and the care with which the consumer monitored these orders,” Lissack advised the court docket.

Lissack additionally famous that in January 2018, HSBC admitted to US authorities that Scott and Mark Johnson, one other senior ex-staffer on the financial institution, fraudulently traded forward of their consumer in 2011 and subsequently tried to hide their actions. Johnson was discovered responsible by a US jury of fraud in 2017, whereas his co-accused Scott efficiently fought an extradition request from the US.

Lissack added that not one of the merchants concerned testified on the trial, depriving ECU of the chance to ask questions. “It’s a blatant and indefensible admission of fraud by probably the most senior international change merchants at HSBC on the time,” Lissack added.

Legal professionals for HSBC have argued ECU ought to have made these claims sooner. In his written closing arguments, Kenneth MacLean QC, representing HSBC, claimed that your entire ECU lawsuit was not made in an inexpensive timeframe and relies on “a contrived and misconceived authorized framework”.

“The HSBC Events didn’t commit the wrongdoing alleged,” MacLean wrote. “The case opened by ECU of widespread and systematic wrongdoing by the HSBC Events was all the time formidable . . . [and there was a] whole absence of a correctly pleaded case to that impact.”

He added that the ECU case has not been borne out by the trial proof as a result of merchants on the financial institution took “completely legit” steps when dealing with these orders in a bid to present their consumer the very best final result.

ECU has additionally claimed that merchants on the financial institution engaged in non-public buying and selling for their very own profit utilizing details about their consumer’s trades, in addition to overcharging for orders with out disclosing this to ECU.

Legal professionals for HSBC will make their closing argument on Wednesday.