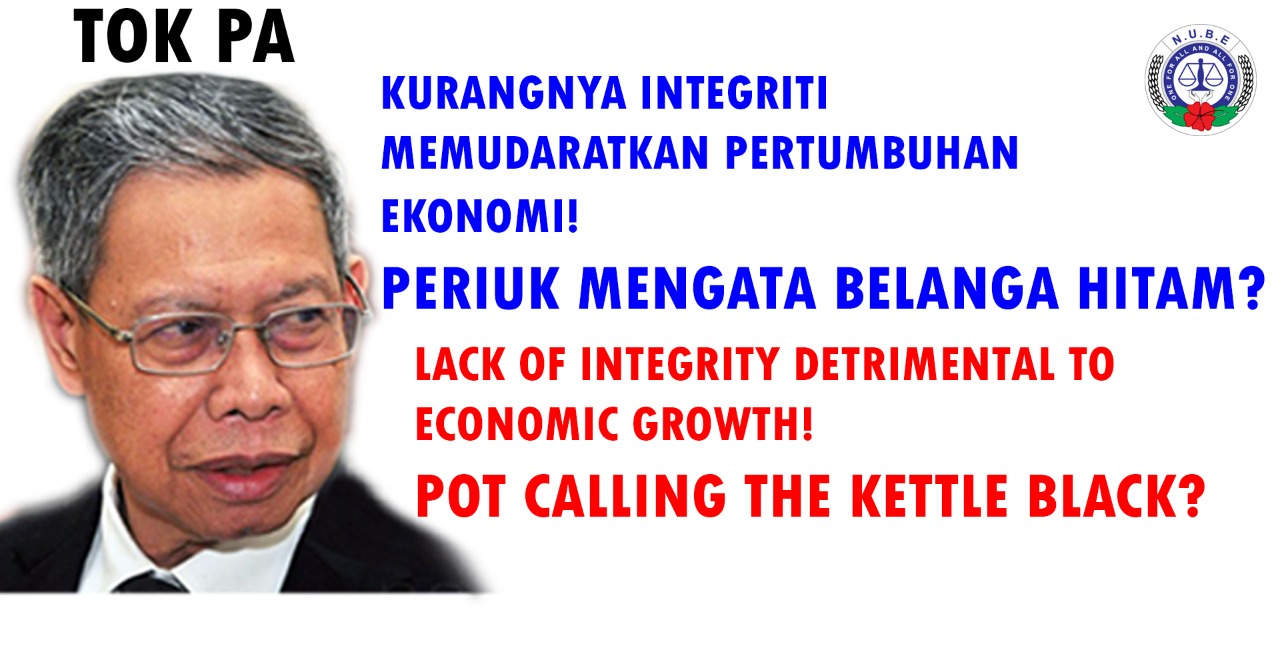 Tok Pa wants his present colleagues in the government to have integrity and avoid unethical practices, as reported in Bernama yesterday. Let us see whether Tok Pa has walked the talk.

Tok Pa was in the government which ruled Malaysia for more than 60 years and jumped ship to Bersatu in September 2018, although he won under the UMNO ticket (UMNO Member since 1978) during GE14 held on 9th May 2018.

All unethical practises mentioned by Tok Pa were in existence in the governments in which he held Ministerial positions, yet he condoned them and continued with his political positions.

Tok Pa has never failed to align within the political affiliation of the ruling governments of the day, such as BN, PH and PN, having held various Ministerial positions in his political career. His shift to another political party was for obvious reasons when his long-time political party lost the GE 14.

In politics, when a politician abandons a political party no longer in power to join another party in power, such unprincipled and dishonourable defections are referred to as “Political Frogs”.

NUBE wrote two appeal letters to Tok Pa, as an Economic Affairs Minister, since 2020 and notified him of the unethical businesses conducted by HSBC Bank Malaysia which were harmful to the livelihood of the B40 and M40 Malaysian workers. Unfortunately, Tok Pa neither prevented the human rights violations by HSBC Bank nor did he respond to NUBE’s appeals even though it adversely impacted Malaysians from all states, including the Kelantanese who voted him in.

Tok Pa’s lack of integrity in managing the human rights violations at HSBC Bank is rather revealing. What happened to his integrity and principles of good governance that he often advocated? Why did he abuse the peoples’ trust in him? Is he vulnerable to the corruption of HSBC? Is the pot calling the kettle black?

NUBE sincerely hopes Tok Pa, at least in his current age of 71, will do justice to the B40 and M40 workers in Malaysia.