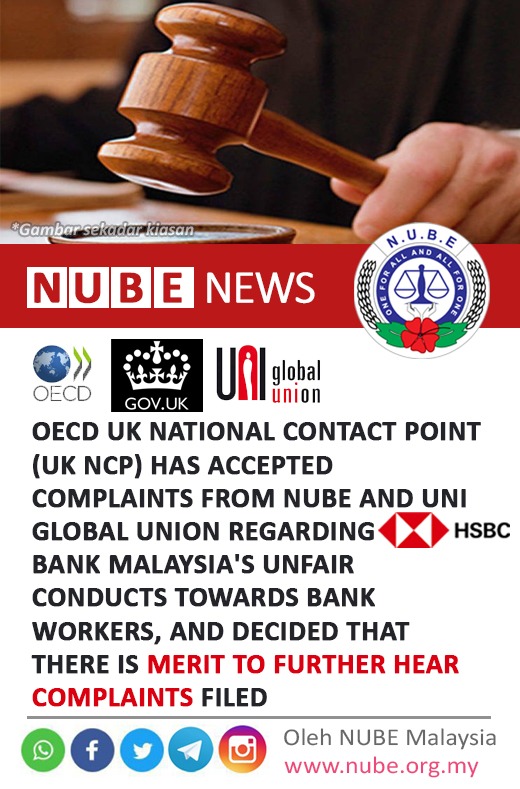 Following HSBC Bank Malaysia Berhad's unfair treatment towards bank workers, its failure to respect the labour laws and the collective agreements that have been signed in Malaysia, the National Union of Bank Employees (NUBE) with the support of UNI Global Union filed a formal complaint about HSBC Bank Malaysia Berhad, a subsidiary of HSBC Holdings Plc, a British multinational investment bank and financial services company, to the UK National Contact Point (UK NCP) for the OECD Guidelines for Multinational Enterprises in December 2020.

The UK NCP, in a statement on their decision issued on 15 September 2021, said it had decided to accept some of the complaints from the NUBE and UNI Global Union about HSBC Bank Malaysia Berhad are valid, and the complaint will go forward for further examination or mediation.

In the complaint, NUBE and UNI Global Union asserted that HSBC Bank Malaysia Berhad has breached certain articles, including under Chapter V of the Guidelines (Employment and Industrial Relations) by:

(ii) harassing and victimizing NUBE member and union representatives for their participation in industrial action taken in response to the breakdown in negotiations;

(v) undertaking an outsourcing process including “forced” VSS/MSS and failing to consult with NUBE ahead of this process, and

(vi) denying NUBE members and employees access to their workstations and work.

In its decision, the UK NCP has decided that some of the issues raised by the complainants (NUBE and UNI Global Union) merit further examination.

According to the UK NCP, the decision for the complaint to go forward for mediation or further examination, is based on the initial assessment made based on the information supplied by the parties.

NUBE welcomes the decision which directly indicates that there is a strong basis for complaints made to the UK NCP. NUBE and UNI Global Union will provide further co-operation to the UK NCP, thus we are optimistic that a positive and constructive decision will be made in the best interests of NUBE members and bank employees in Malaysia.

For the record, NUBE was forced to bring the issue to the attention of the UK NCP as local authorities including the Ministry of Human Resources, the Ministry of Finance and Bank Negara Malaysia had failed to help find constructive solutions to issues raised over the past years.

NUBE is grateful for the strong support given by UNI Global Union and the fair consideration given by the UK NCP in investigating our complaint, and its decision to proceed for a resolution.