Felda chairman unhappy with returns from its investments 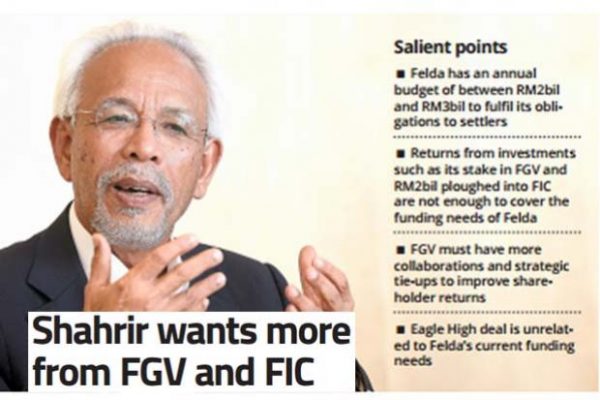 KUALA LUMPUR: The Federal Land Development Authority (Felda) seeks better returns from its slew of assets to help run programmes for settlers.
Three months into his appointment as Felda chairman, Tan Sri Shahrir Abdul Samad (pic) said that the next two years would be crucial for the government entity and its 112,000 settlers.
“Last year, the total income of the settlers amounted to RM3.97bil. It is an economic powerhouse. We want to continue the philosophy of balanced rural development while also empowering the people,” he said in an interview after 100 days as chairman of Malaysia’s most influential government entity.
He felt that the returns from the assets held by Felda must be improved significantly compared with what it was yielding.
Towards this end, he wanted the management of public-listed Felda Global Ventures Bhd (FGV) and the Felda Investment Corp (FIC) to improve returns to their shareholders. Felda is the single largest shareholder in FGV with 33%, while it has some RM2bil invested in the FIC.
FGV contributes about RM300mil to Felda annually, including RM250mil under a land lease agreement while the returns from the FIC are a far cry from what other government-owned funds are contributing.
On the FGV, Shahrir said that he wanted to see the company go back to its core competency in managing plantations and improving returns to its shareholders.
“The returns can be improved. We used to own the plantations (currently held by FGV) and we know what kind of returns that can be given to the shareholders.
“They have to look at ways to improve. They can collaborate with other plantation companies to increase profits. As the major shareholder we want to see better returns.”
On the FIC, Shahrir said that for the RM2bil invested in FIC, it was not giving the desired returns after three years of underperformance since being incorporated in 2013. FIC has investments in hotels, properties and listed-companies.
Shahrir said he has made changes to the board of FIC. He had asked the previous board to resign due to the company’s disappointing performance.
“I leave it to the new board to decide on investment matters. It comprises industry professionals and most of them are outside of Felda…so there are no inherent conflicts. They will be accountable for FIC’s future performance,” he said.
He pointed out that Koperasi Permodalan Felda (KPF), the co-orperative owned by members and management of Felda, returns about 10% annually to its members on a fund size of RM2.5bil. KPF’s returns are mainly derived from savvy investments in the equities market as well from property ventures.
Felda has an annual budget of between RM2bil and RM3bil to fulfil its obligations towards the settlers ranging from housing to education and assistance in managing land.
Aside from FGV’s contributions of around RM300mil to Felda and up to RM1bil from the monetisation of assets, Felda makes a gross income of over RM200mil a year from the 40,000ha of plantation that it owns and manages. The agency expects to receive RM650mil more from collection of advances and other investments this year, according to Shahrir.
“We may consider a long-term sukuk to fill the funding gap. That way we can repay some loans and reduce the interest cost burden,” he said. He also pointed out that the deal to acquire a stake in Indonesia’s Eagle High Plantations Tbk has nothing to do with Felda’s current funding needs.
“It is purchased and financed by the Government. It is just parked with us because we are the palm oil experts. As for Felda or FGV’s involvement, it will be decided later,” he said.
Felda’s 112,000 settlers hold court in more than 50 parliamentary seats, making the organisation an important entity for the Government.
Shahrir replaced Tan Sri Mohd Isa Abdul Samad as Felda chairman in January. Isa remains the chairman of FGV.
On a separate issue, Shahrir shot down assertions that Felda has neglected its duties to settlers as alleged by opposition politicians. He said that over the past five years, Felda has distributed RM227.4mil in dividends paid out by FGV to the settlers – equivalent to RM2,187 per settler.
“Settlers’ income is returned 100% and Felda does not charge any management fees. The only deductions we make are from the advances that we give to settlers to help them during the the period when their palm trees are still growing,” he said.