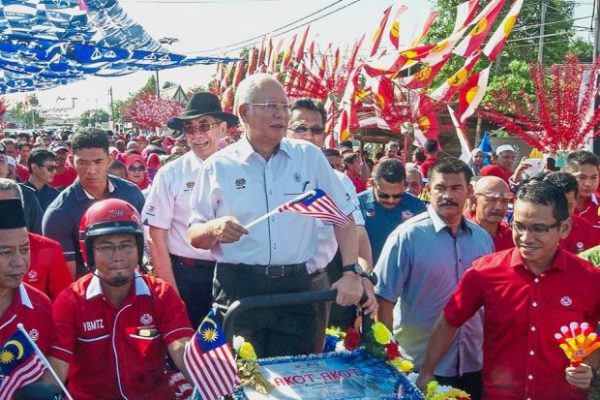 Najib said he had big plans and a vision for the country while placing the people as his top agenda.

“When I became the Prime Minis­ter, I stressed on putting the people first. To do that, we have to feel the people’s pulse, know their problems, wants and aspirations.

“That is why I have come up with the 2050 Transformation Plan (TN50). We have to set our sights on the future as well.

“We want to place Malaysia among the top 20 nations of the world. We do not want to miss the mark. We do not want others to belittle us,” he said during the Jom Bantu Rakyat programme in Paka here yesterday.

Najib said it could already be seen that world leaders respected Malaysia, citing King Salman bin Abdulaziz Al-Saud’s decision to set up the King Salman Centre for Global Peace in the country.

“If we never followed the path of true Islam, do you think he would have chosen Malaysia?

“He is proud of us because we are moderate. We are not extreme and not too liberal,” he said.

As the Government, Najib said that Barisan Nasional had the means to realise its promises.

“We are not like the Opposition who can insult each other in the past and then take back their words today.

“They practise Machiavellian politics with the ends justifying the means.”

Their objective was to topple the Barisan Government even though it would mean being in cahoots with their own enemies, he said.

Najib said even at its worst, Bari­san and Umno would still fight for Islam and development for bumiputra and non-bumiputra alike.

During the event, Najib launched the Rumah Idaman Rakyat project to be developed by SPNB Idaman Sdn Bhd.

The subsidiary of Syarikat Peru­­ma­­han Negara Berhad will build 229 units of houses and shops in Kampung Santong here.

He spent about 20 minutes with Zaleha, 71, at her home in Kampung Molek.