NUBE SUPPORTS THE PRIME MINISTER, MINISTER OF FINANCE AND EPF IN DISALLOWING FURTHER WITHDRAWALS FROM EMPLOYEES PROVIDENT FUND DURING EVERY DISASTER

NUBE certainly sympathizes with the plight of the flood victims but dipping into the workers’ retirement fund during each disaster is not a wise approach. It is a universally accepted view that the governments, at both the federal and state levels, are responsible for ensuring availability of sufficient basic necessities and their timely distribution, to alleviate the hardships faced by flood victims. It is particularly critical now, in the seven states hit by floods recently.

Therefore, NUBE is of the view that the scheme and incentives announced by the Prime Minister may assist the flood victims and when it is insufficient, the government should increase its resources allocation, accordingly. But to be obsessed with dipping into the Workers’ Retirement Fund during every disaster is a sign of an incompetent government and sadly the said politicians are from the ruling government.

These politicians must be mindful that the workers’ retirement coffer has been significantly reduced from the withdrawals made in the last two years, consequent to the Covid-19 pandemic.

The EPF has given enough statistics on the status of the workers’ retirement savings after various withdrawals were approved under the i-Lestari, i-Sinar and i-Citra schemes.  This led to a significant number of contributors, largely from the B40 group, highly vulnerable in retirement. It’s rather shocking that a high 28% (3.6 million members) have less than RM1,000 in their savings.  Sadly, many of such pitiful contributors are from the community the political party UMNO is representing. We must accept the fact that the lack of sufficient savings is also, inter-alia, due to the absence of a decent wage increase for decades, and particularly, the lack of a living wage.

The UMNO’s government of more than 60 years failed to uplift the wages of workers to match Singapore and other neighbouring countries, which were either behind us or with us at one time. For Malaysians, this age of unparalleled prosperity is causing great social dislocation.

Furthermore, a lack of political will to fight institutional corruption has led to the deeply worsening and troubling levels of corruption. This cancerous disease has deprived workers of their fair share of the nation’s wealth. Unfair labour laws have further hindered workers and unions from demanding for a fair labour share of income from the profits. At the same time, GLCs and GLIC was not exemplary in promoting the living wage.

To add salt to the wound, the misappropriation of the sovereign fund of Malaysia by certain leaders, has retarded income growth for ordinary citizens, to be cared for during such disasters.

Therefore, NUBE hopes that the government led by Datuk Seri Ismail Sabri will not repeat the mistakes of his predecessors and prepare an immediate action plan for a decent living wage for workers so that workers will have decent savings for exigencies and an appropriate retirement savings for social protection.

NUBE supports the stand taken by Datuk Seri Ismail Sabri and hopes that he will firmly defend his decision for the well -being of the contributors in the long run. NUBE hopes his party will not succumb to short term popular political pressure and leave the workers in the lurch in the long term. Doing so will cause severe social problems, and we are already seeing such indications.

NUBE recognises some of the good policies UMNO had introduced during their tenure as the main ruling coalition partner but insisting the EPF should allow continuous withdrawals, even for flood victims, is a nonstarter if the party wishes to serve the Rakyat sincerely after a bad show in the last election.

To gain credibility, the party should be urging the government to use its resources to give genuine assistance to the flood victims and close the wide gap of inequality created during their 60-year administration. 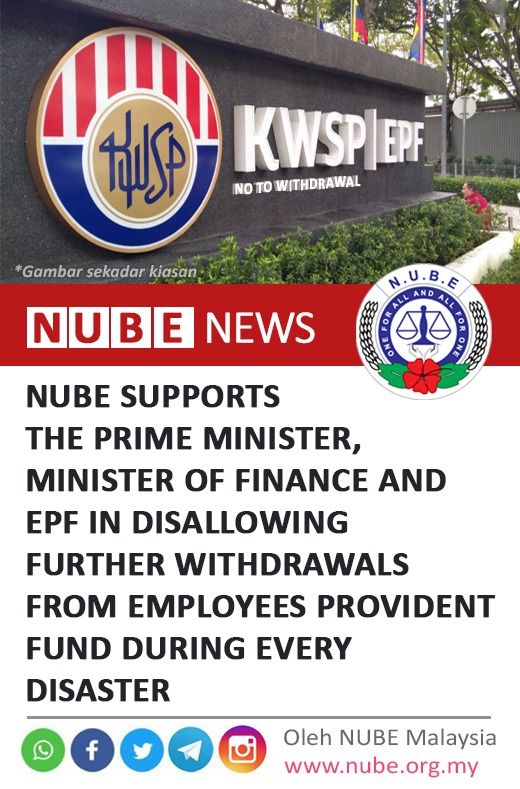