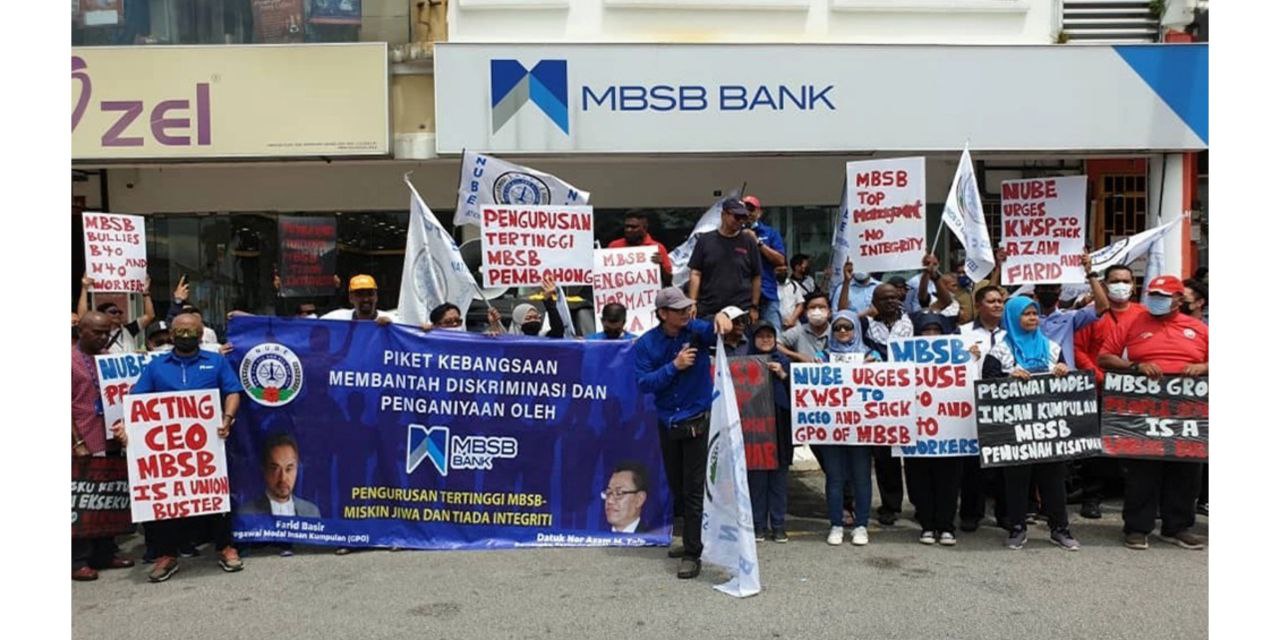 ABOUT 200 members of the National Union of Bank Employees (NUBE) staged a protest against MBSB Bank Bhd in front of the bank’s branch at Bandar Baru Bangi in Selangor on Wednesday, over allegations of discrimination and abuse by the management towards its employees.

Police officers were seen monitoring the situation in the area to avoid any untoward incidents.

NUBE secretary general J Solomon and other union leaders expressed their dismay over MBSB Bank’s actions at the picket, which lasted for an hour.

They outlined the reasons and objective of the protest, highlighting a list of alleged union-busting actions by the bank’s acting CEO and chief people officer (CPO).

Solomon said the bank also refused to provide NUBE-registered workers from the bottom 40% and medium 40% groups with temporary financial support of RM1,000, and manipulated worker designations and job descriptions to obstruct them from joining NUBE.

He added that MBSB Bank allegedly failed to deduct the union dues of the Digital Ambassadors who joined NUBE as promised and refused to accord the lower housing loan interest rate benefit for members as stated in the Collective Agreement.

“The picket will continue until we find a solution for all these disputes,” Solomon noted.

The union stressed that the dismissal of MBSB Bank’s top management should be expedited as they are not bringing any benefit to the government as a bank whose interests are owned by government-linked companies, thus safeguarding the harmony and interests of MBSB Bank’s employees.

NUBE noted that it has never faced any problems with MBSB Bank before, particularly when the bank was led by its former CEO, the late Datuk Seri Ahmad Zaini Othman.

The union said it had no choice but to hold the protest as the top management of MBSB Bank has refused to resolve the issues raised.

The protest began simultaneously in all states from 12.30pm to 1.30pm.

A total of 150 of the approximately 20,000 registered NUBE members currently serve with MBSB Bank nationwide.