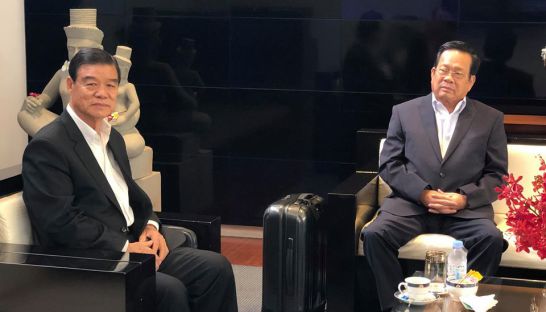 Cambodian maids who work in Malaysia would be given smartphones, bank accounts and counselling under a new agreement signed by the two countries yesterday, an association representative said – measures intended to prevent the kind of widespread abuses that resulted in a ban on sending domestic workers to Malaysia six years ago.

But the news, announced in Malaysian media yesterday, came as a surprise to labour rights groups in both countries who said they had not been consulted on the long-awaited MoU, which still has yet to be made public.

Foo, reached yesterday, said the agreement creates a raft of protections for Cambodian domestic workers, who are needed to fill a shortage of maids in Malaysia.

Among other things, the association will provide each worker with a free smartphone, monitor their salary payments and make employment agencies sign contracts laying out the duties and responsibilities of maids.

“We have to work very hard to train and convince the people in Cambodia that Malaysia is a good place to work,” Foo said. “We will have to treat this very carefully and make sure the interests of all the parties are protected.”

Foo declined to provide a copy of the MoU, stating that it is not public.

Cambodia banned the sending of maids to Malaysia in 2011 after workers reported widespread abuse, including overwork, salary disputes and even physical and sexual assault. The two countries agreed to reopen the pipeline in 2015, but the rollout was marred by procedural confusion.

Labour rights groups expressed frustration yesterday that they were not included in the process of developing the MoU between the association and Ministry of Labour, or the one in 2015 that unofficially lifted the ban.

Keo Poeurn, coordinator of the labour group Informal Democratic Economy Association, said he has not seen the agreement but hoped it requires regular inspections of working conditions and time off for workers.

“If they don’t give protections like that, I don’t think maids working in Malaysia are safe,” Poeurn said.

Adrian Pereira, executive director of Malaysian human rights group North-South Initiative, questioned whether the agreement would be enforced.“[The Malaysian Association of Foreign Maid Agencies] needs to ask itself how many of its own members have gone through the guidelines,” Pereira said.

Representatives at anti-trafficking NGO Chab Dai and human rights group Adhoc said they were also unaware of the new agreement.

It is not clear how many agencies, if any, are currently sending maids to Malaysia.

A representative from Phnom Penh-based recruiting firm Elite Manpower Agency, who declined to give his name, said the company has not seen the new MoU with Malaysia.

“Our agency has started to advertise for recruitment and preparing training, but we’re looking to see the new prakas from the Ministry of Labour to be able to set the timeline to send the maids,” she said.

Foo said the association hopes to bring in up to 20,000 maids a year, starting with a small batch at the beginning of next year.